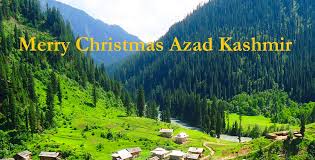 MIRPUR (AJK),  (Parliament Times) :  In Azad Jammu Kashmir, Christmas, the birth day of Jesus Christ (AS) – the religious festival of Christian fraternity, will be celebrated in AJK , including all three districts of Mirpur division on Friday – Dec. 25, with fullest traditional religious fervor and devotion and with the renewal of the pledge to continue spreading the teachings of Jesus Christ (AS) for maintaining complete harmony, brotherhood and love and affection among the humanity.

The Christian community in the area will pray, through special prayer services for the progress, prosperity and sovereignty of Pakistan and the freedom of the disputed Jammu and Kashmir from long Indian illegal occupation, Organisers said adding they would also offer special prayers for the unity, solidarity, progress and prosperity of Pakistan coupled with the renewal of the pledge to perform an active role for the uplift of the motherland – Pakistan side by side the majority Muslim community of the country.

Special Christmas ceremonies will be hosted under the set SOPs due to COVID-19 at Mangla (Mirpur) under the auspices of Christian Welfare Trust, the central organization of local Christian community, with the coordination of the local social welfare and public representative organizations of the Muslims, in Mirpur district to celebrate the Christmas with great enthusiasm and devotion and religious zeal and fervor.

The ceremonies will be attended by large number of people from all sections of life from the Christian community. The venues of the ceremonies were being beautifully decorated with colorful buntings and banners. Special gifts will be distributed among the children and the social workers

Gill told this Correspondent here on Thursday that there was complete freedom to the minorities including the Christian community in AJK to perform their religious rites and other traditional and cultural obligations at par with the majority Muslim community other parts of the country.

He said that the minority communities in AJK were provided conducive environment to perform their religious rights and other due obligations.

Indian claim to be a big democracy of the world is a total fraud : PM AJK

India has deprived Kashmiris of their fundamental rights: Dar