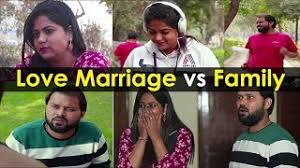 Nisar Ahmed
Where in the world, are the Muslim youth getting their ideals about love, marriage and family? Are we turning to the Qur’ân and the Sunnah of the Prophet SallAllâhu ‘alayhi wa sallam? Unfortunately, we do not. In the Indian subcontinent, we’re turning to Indian films; In America and possibly the rest of the world, we’re turning to Hollywood. Mumbai, a famous mainstream Indian film, features a Muslim girl who falls in love and ultimately marries a Hindu boy. At the beginning of the film, she is shown in niqab [veil]. After her family refuses to allow their marriage, the girl runs away and does not speak to them for six years. At the end her parents come to her and all are happy. Hollywood, one of the largest influences in the world, plays a huge role in the formation of concepts about love, marriage, and family. These films portray men and women who are ‘in love.’ And yet, often times the individual they ‘love’ will be someone they just saw or spoke to briefly. Suddenly, however they are willing to lose their spouse, their family, their job, their life, and even their Lord. It is, therefore, more correct to say that they make these sacrifices because their desires have become their god. Allâh speaks of these people when He says: Have you seen the one who takes as his god his own vain desire? Allâh knowing [him as such] has left him astray, and sealed his hearing and his heart (and understanding), and put a cover on his sight. Who, then, will guide him after Allâh (has withdrawn guidance)? Will ye not then receive admonition?” (45:23) But yet these very same people that Allâh has described in His book as most astray have become our example and ideal. In 1998, Titanic, grossing more than 1 billion dollars in sales worldwide, became the most popular movie across the globe. The story features a young girl of age 17 who is engaged to be married. After meeting and ultimately falling in love with another man, the young girl cheats on her fiancé and disobeys her mother. Both the mother and the fiancé are shown as superficial in order to make her disloyalty more acceptable. The messages of these films are very penetrating. The most powerful message is: if you sacrifice for ‘love’, all will be well in the end. In other words, if you disregard your religion, your family, your God, following only your desires, you will be rewarded in the end. If we look to America, we can see the clear effects of these misshapen concepts. ‘Why has divorce reached the unprecedented rate of 40-60%? The answer lies in the misconstrued definition of what true love and marriage actually is. These movies feature the wedding as the end of the movie, and thus marriage is seen as the end of a love story, rather than the beginning. Does Piety Matter? What effect does this have on our society, on our youth in particular, who are the victims of these misconstrued ideals. What is the basis of the “love” portrayed in these movies? What criterion will young Muslims affected by these images use when choosing a spouse? Will they follow the Sunnah of the Prophet Sallallalhu ‘alayhi wa sallam, who says the one who marries for Dîn [religion and conduct] is blessed? Or, will they base their choice on an empty, fleeting attraction disguised as “love”? “Who is more astray than one who follows his own lusts, devoid of guidance from Allâh? For Allâh guides not people given to wrongdoing” [28: 50]. -The writer is a freelance columnist, based in Shikarpur.

Kashmir and passivity of the world powers

The Only Shelter for Orphans, Noreen Zindagi Welfare Trust

Parliament Times - January 26, 2021 0
ISLAMABAD,   (Parliament Times) : The AJK President Sardar Masood Khan has asserted that today’s India is neither secular nor democracy but a settler-colonial power,...

Speakers of a webinar call for immediate end to HR violations...

Kashmir and passivity of the world powers

Belgium will be chairman of the Benelux for the coming year