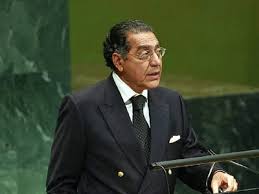 Munir Akram apprised UN Secretary general about the involvement of India in planning terrorist activities in Pakistan and demanded of him to note it.

Munir Akram held Pakistani dossier with regard to India’s terrorism will be member countries of UN Security Council.

He remarked India was involved in persistent violations of ceasefire on LoC and Pakistan has every right to defend itself against Indian aggression.

He observed that India was involved in sabotaging CPEC which has a vital role in the development of Pakistan economy.

Talking to private TV channel, Munir Akram said India has nothing with it to defend itself. Evidence have been presented in our dossier which cannot be rejected.

He stated that Indian allegations are weak and they are not supported with any evidence. The situation is unstable in our region since long, he said adding security situation has gone more fragile following the August 5 steps by India.

We want a peaceful solution of Kashmir issue and Indian terrorism. Kashmir issue was debated in UN Security Council thrice during the last three years. International community wants both sides should exercise restraint.

We have always pursued a responsible policy, he said. The powers for taking action lies with Security Council in UN. Therefore, a consensus should be among the five permanent members of security council on this count, he urged.

Daily Parliament Times - January 18, 2021 0
Umer Butt; Islambad, (Parliament Times): A Protest has staged by students of different Universities of Islambad and Rawalpindi against "on Campus Exam Notification" issued by...