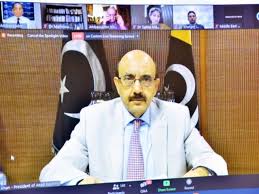 MIRPUR (AJK),  (Parliament Times) :  AJK President Sardar Masood Khan said on Wednesday that the silence of United Nations’ Security Council on the Kashmir conflict has raised several questions on the global leadership role of the world body in the field of diplomacy.

He maintained that the UNSC had done nothing except issuing ambiguous statements in spite of the severity of the Kashmir issue and the worst human rights violations in occupied Kashmir.

The Security Council, he said, should break its silence on the ongoing killings, genocide and open crimes against humanity in Occupied Jammu and Kashmir and end the impression that it does not stand with the tormenter in the battle between the oppressor and the oppressed.

Khan said influential countries of the world were reluctant to hold India accountable despite war crimes and crimes against humanity being committed by it in Occupied Kashmir due to their strategic and economic interests. It is in fact a failure of the global system exist in the form of United Nations.

Speaking as chief guest at a joint webinar organized by Pakistan High Commission Ottawa and Pakistan Consulate in Toronto, the Azad Kashmir president said that we need to transform the Kashmir freedom struggle into an international civil liberties movement and a BDS (Boycott, Divestment, Sanctions) Movement should be initiated and strengthened to prevent India from trampling human rights of Kashmiri people.

He said that in order to resolve the Kashmir dispute through multilateral diplomacy, it was incumbent upon us to mobilize the world’s parliamentary forces, international civil society and media to earn support for just the struggle of Kashmir.

Talking about the observance of the black day against India, President Sardar Masood Khan said that on October 27, 1947, India had invaded and occupied a large part of the state of Jammu and Kashmir against the will of the Kashmiris on this day.

Kashmiris, he said never accepted the Indian rule and every year observe this day as a black day to express their abhorrence and anger against the Indian military occupation and to draw the world’s attention to the unresolved issue of Kashmir.

Drawing attention towards multilateral diplomacy as a possible mechanism for resolving the dispute, the President highlighted the need for effective communication to support the legitimate rights of Kashmiris to self-determination and underlined that India had been distorting facts about Kashmir and an effective communication strategy can help us counter it.

Addressing the participants of a protest demonstration organized by Tehreek-e-Kashmir UK outside Indian Consulate at Birmingham and Indian High Commission London through video link, Sardar Masood Khan appealed to the UK parliament, government, and civil society to play their role to end the ongoing vicious cycle of transfer of Hindu population to Jammu & Kashmir to alter its demography.

“India is committing serious crimes of genocide, crimes against humanity and war crimes and it must be held accountable”, he emphasized.

The AJK President called upon the United Kingdom to step forward and save Kashmir from annihilation and the region from a devastating war. “Don’t send guns to India that kill Kashmiris, don’t lend capital to India that impoverishes and disenfranchises Kashmiris.

The Kashmiris, he said have vowed to continue their struggle until they get their freedom and self-determination. Lauding the efforts and dedication of President Tek Fahim Kayani for Kashmir freedom movement, Sardar Masood Khan said Kashmir Freedom Movement had become an international movement because of the resolute efforts of the diaspora community.

Describing October 27 as the darkest day in the history of Jammu & Kashmir, AJK President deeply appreciated the efforts to mobilize support for the right to self-determination of the people of Jammu & Kashmir and to put an end to the dark night of terror and oppression unleashed by BJP- RSS regime in the occupied state.”

Addressing the participants of a webinar organized by Kashmir Info Brussels to mark Kashmir Black Day on the topic of “Human Rights Violations and Demographic Re-engineering by India in occupied Jammu and Kashmir”, Khan said that describing happenings in Indian Occupied Jammu and Kashmir as human rights violations is merely a euphemism as what India was doing constitutes war crimes and crimes against humanity.

He added that the global audience tends to confuse Kashmir with other human rights issues seen all over the world, whereas, 900,000 Indian fully armed troops are brutalizing the people.

He said that in IOJK there are killings, maiming, blindings and incarcerations; rape and molestation is used an instrument of war. The occupation forces are immune to persecution because of lawless laws like the Public Safety Act and the Armed Forces Special Powers Act, he said, adding that such severe human rights violations as seen in occupied Kashmir have not been witnessed around the globe.

The President said that he personally was immensely disappointed by the role of the UN in this matter. The UN is a tight lip and is influenced by expediency and has issued nothing but anodyne and ambiguous statement. They are reluctant in siding with the innocent Kashmiris.

He thanked the European Parliament and the Parliamentarians for taking a keen interest in a peaceful political solution to the Kashmir issue and for speaking out against human rights violations in Occupied Jammu and Kashmir.

The introduction of half a dozen resolutions and a letter from members of the EU Parliament to the President of the European Union urging him to play his part in ending oppression in occupied Kashmir is a significant development and we look the gesture with profound admiration, he stated.

The State President also addressed webinars organized by International Human Rights Commission, Pakistan’s Embassy at Washington DC and High Commission for Pakistan in the UK and urged the international community to realise the gravity of the situation in the region.

Iran ready to cater to needs of Pakistan in energy sector: Iranian ambassador

No progress in Intra-Afghan talks

Announcement by PTV chairman Naeem Bokhari on refusing to give coverage...

Iran ready to cater to needs of Pakistan in energy sector:...

40 Pakistanis died of Corona virus in a day