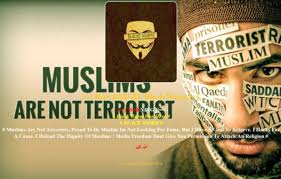 Aqib Shaheen
The world is currently engulfed in terrorism for the sake of Asia, Europe, Africa, America. All the countries are against terrorism. But why only Muslims are notorious as terrorists. If we see the most of the Muslims are being persecuted the most in the world ,then the biggest terrorist countries should be the United states,Israil,india or any other face.How can we accused of being terrorists. It is common idea in Eu pe that those involved in the terrorism are either muslims or blacks .European Films Dramas and Tv programmes use the term criminal for black person and terrorist for a Muslims and soft for white people. According to reports more than 60 people were killed and 95 others were injured in a shooting at a musical show in las Vegas, according government sources,215 people were injured in that incident the dead and wounded including, women, and children .Because of the operation was carried out by an American Christian and he is not a terrorist. He was decleared mentally ill.Similarly on june 21 2016, 49 people were killed in plas night club the killer was omar matin,an American citizen.. In September 2013 former US soldier Aaron Alexis, who was a US citizen killed 21 people at the Navy yard headquarters in July 2012 James halke an American citizen broke into a cinema in Oracologado and opened fire with Tear gas, killed 12 people.But the people involved these incidents were mentally ill because they were American’s and white Christians can’t be called dust interestingly not only the United States but also the western media has branded the killing dozens of people are mentally ill instead of calling them Christians. Now look at Asian countries muslims are victims of terrorism. In Myanmar muslims are being genocide they have no identity,no house, no land they are forced to live in boat’s at sea.They are not being forgiven there either. And those who kill them are Buddhist who are said not only to kill even the break in their religion killing someone is a great sin. But they are the killers of hundreds of muslims but unfortunately no one is calling them terrorist. All the blame is being laid on the muslims. In India the oppression of the muslims reached at climaxe. Everyday the blood of muslims has being shed.sometimes in the name of cow, sometimes in the name and some others in the name of land. Muslims are not allowed to worship freely.Muslim girls are abusing everywhere like colleges, hostels, Bus Stop and office’s etc and also girls not not allowed to wear hijab inside college’s and universities etc so India is the first country where women’s aren’t safe. The Indian occupied Kashmir where thousands of gent’s are being killed in every year, many houses are being destroyed, poison are flow of innocent youths even small children’s are not forgiven. Mosques are closed. Kashmiries are being distributive from their rights political, social and religious leadership is being spared because they are muslims. Kashmir is disputed state and subjected to a forced occupation. Kashmir is one of the state where ….that India occupied. In Indian kashmir is one where their is no crime against terrorist but if anyone speak against they take oppression and called them terrorists. World is wet messaged that America, India,and Israil are the real one terrorists they destroyed Afghans, Kashmiri, Syria, palastine, Iraq etc. When we see muslim countries there is a decent crime against other religions examples Arab countries their are millions of non-Muslims working they are happy and enjoying their … Getting earning money then how these stupid countries are called muslims terrorists.

India’s Real Face Has Been Exposed

Parliament Times - February 27, 2021 0
Multan:   Jamaat-e-Islami Amir Senator Sirajul Haq has slammed the PTI led government for its failure to remove Pakistan from the grey list of the...

AJK President pays glowing tributes to the defenders of country