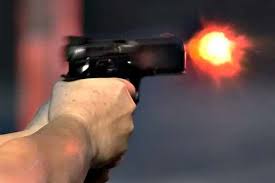 RAWALPINDI:   In broad daylight four armed robbers, snatched Rs 3.5 million and 2 mobile phones from a trader at gunpoint and fled, near Haji Chowk area of Rawalpindi.
According to the police, Habib-ur-Rehman was returning home with his brother Saeed after selling a house in Haji Chowk area of Sadiqabad police station.
The robbers opened fire on the vehicle of the trader when they attempted to drive away, bullet shattered the front window of the vehicle and hit Habib-ur-Rehman, seriously injuring him.
Meanwhile, the accused fled with Rs 3.5 million and two mobile phones in the vehicle. The injured man was rushed to Benazir Bhutto Hospital where his condition is said to be out of danger.

An exhibition of books authored by Prof Zulfikar Ali Bhatti gets...

Parliament Times - March 3, 2021 0
By Our Correspondent Hyderabad: A two-day exhibition of books written by acclaimed writer and educationist Prof. Zulfikar Ali Bhatti got underway at the Central Library...