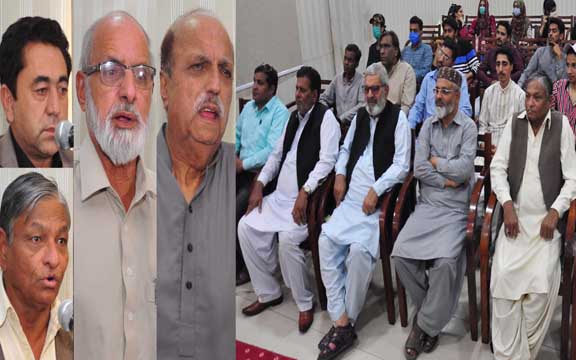 Rawalpindi:  (Parliament Times)   The launching ceremony of the book “Intizar Ki Galion Main Aik Pal” by famous poet from Abbottabad Abdul Khaliq Shaer Hazarvi held under auspices of Punjab Council of the Arts, Rawalpindi in collaboration with literary society Daira. The ceremony was presided over by Syed Dr Ghazanfer Mehdi. While addressing at the ceremony Dr Ghazanfer Mehdi said that Hazara has been the center of knowledge and wisdom from many centuries. Hazara community had taken active participation in Pakistan Movement under the leadership of Jalal Baba. But this beautiful piece of land Hazara did not get that intention that was required after independence, people of the region still living a miserable life, he added. Abbottabad Press Club and literarypersonalities had served the people of Hazara. He requested the Government to start all overagain the Jashen Hazara. Abdul Khaliq Hazarvi is great poet and journalist , who worked tirelessly for promotion of Hazara literature, he further added. Prof, Asif Saqib, Barrister Rubab Mehdi, Doctor Ayub Sabir, and Director PUCAR Waqar Ahmed congratulated Abdul Khaliq
Hazarvi for his new poetry book. Abdul Khaliq Hazarvi presented his book to Rubab Mehdi,
who came from London to attend the book launching ceremony. A lot of literary person form Islamabad and Rawalpindi attend the ceremony. At the end of the ceremony Abdul Khaliq Hazarvi recite a sub part of his new book and get appreciation from the audience

Biwi NO1 staged at PUCAR