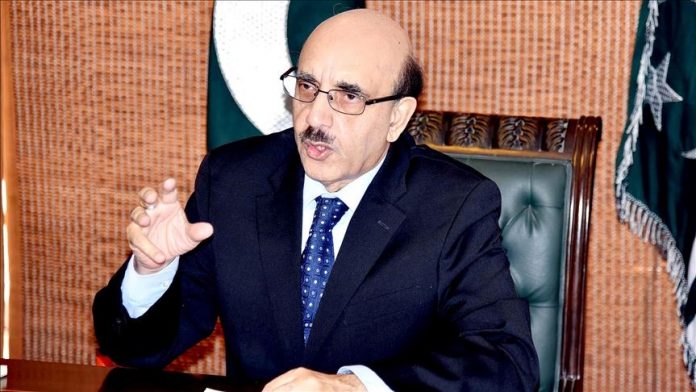 MIRPUR (AJK):    (Parliament Times)   The Azad Jammu and Kashmir (AJK) President Sardar Masood Khan has said that the Kashmiri elders had liberated Azad Kashmir not to incorporate it into India or create a sovereign state but to make it part of Pakistan in the light of the decision taken at the resident of Sardar Mohammad Ibrahim Khan in Srinagar on July 19, 1947.

He maintained that the brunt of the political blunder committed by Sheikh Mohammad Abdullah and Maharaja Hari Singh shouting the slogan of sovereign Kashmir in 1947 was still being borne by the people in Occupied Jammu and Kashmir in the shape of cruel Indian subjugation.

Speaking as the chief guest at a function held in Thorar in Poonch AJK, on Monday to pay homage to martyrs of Thorar, he advised the youth of the liberated territory to follow into the footprints of their elders, and play the role their elders had played in Thorar, Mang and other areas of AJK for the cause of liberation from the Indian shackles, AJK President office told media late Monday.

He said that the youth need to offer stiff resistance to Hindutva philosophy as this the doctrine will not remain confined to mere India and occupied Kashmir, but it will engulf the whole region. Under this doctrine, he added, India had already settled 1.8 million Indian Hindus in occupied Kashmir during the last few months, and now the followers of this doctrine are publicly threatening to eliminate Pakistan and Azad Kashmir.

The AJK President said that the Indian rulers consider nuclear Pakistan as the biggest hurdle in the way of their hegemonic and nefarious designs. Therefore, the youth of Azad Kashmir should prepare themselves to not only divert the tide of the wave of Hindutva but also pledge to defeat it.

Referring to the latest situation of occupied Kashmir, Sardar Masood Khan said that Kashmiris were the most valiant nation in the world, and they were fighting one million regular Indian troops, and despite suffering repression, they have been fighting the Indian occupation forces for the last 72 years.

Similarly, he went on to say that 600,000 people of 18,000 families of Azad Kashmir living along the Line of Control are offering sacrifices on a daily basis while our youth and officials who are part of the armed forces of Pakistan are sacrificing their lives for the defence of Pakistan and Azad Kashmir. Therefore, no one can say that the Kashmiri nation is inactive or has succumbed to the Indian might.