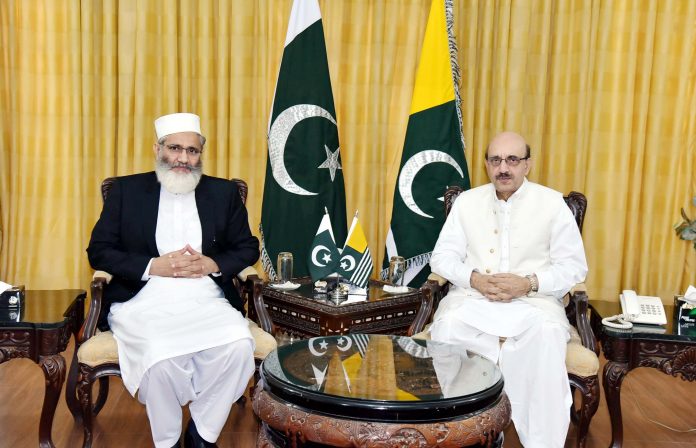 The President said that despite the condemnation of India’s moves on 5 August last year, India continues unabated with its plans to colonise and strengthen its illegal occupation of IOJK. He added that not only this, the India government is economically starving the Kashmiris by awarding existing businesses contracts of the Kashmiris to non-State Hindus from all over India; and under dubious historical records and mappings is planning to build thousands of temples all over IOJK. “What took decades under the Balfour declaration is being replicated and implemented in a matter of two-three years in IOJK under the New Domicile Rules. The unique identity of Kashmir is being totally be wiped out and we will have no Kashmir to defend”, he said, President office told media here Saturday evening.

The AJK President on behalf of the Kashmiri thanked the Jamaat-e-Islami Pakistan and AJK chapters, and other international organisations working under its umbrella like Tahreek-e-Kashmir for engaging masses, organising massive rallies and creating awareness on Kashmir. He said that political mobilisation is a key factor in raising the profile of the Kashmir dispute, in helping stop the illegal settlement of non-State Hindus and the massacre of Kashmiris in IOJK. “Through political and diplomatic efforts, we must transform the Kashmir issue into an international movement, which the global community cannot overlook”, he maintained.

Siraj-ul-Haque reaffirmed the support of the Pakistani people towards the realisation of the right to self-determination of the Kashmiri people. He said that liberating Kashmiris from Indian occupation is our topmost priority and we will continue to advocate and strive for this just cause. He said that in the face of Indian repression and subjugation, the people of IOJK have not shown any signs of giving up and we will not give up on their Kashmiri brothers and sisters.

Both the leaders expressed their commitment to intensify awareness-raising on the Kashmir issue and continue to mobilise support for the cause both nationally and internationally.

“Kashmir is not about roads but far bigger issue – required to be settled without further delay”: Mehbooba Mufti