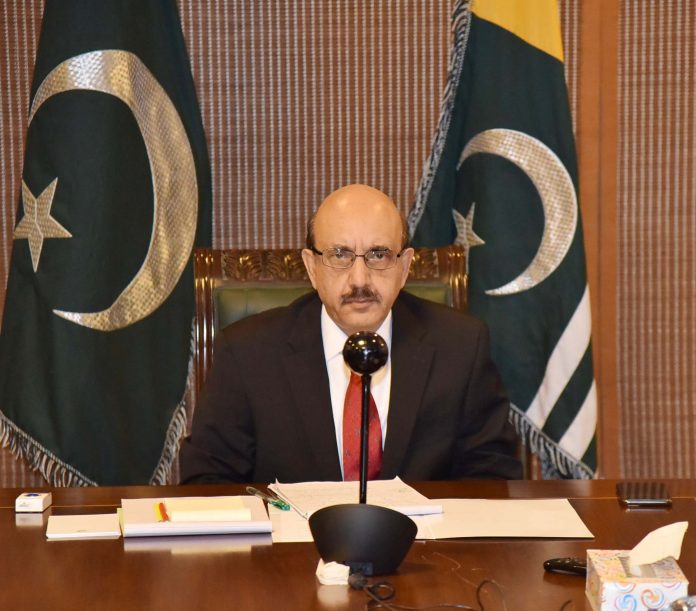 Islamabad/ MIRPUR (AJK): (Parliament Times)    Sardar Masood Khan, President Azad Jammu and Kashmir, has said that it is unfortunate that the United Nations during its General Assembly session has not put Kashmir on its agenda. Kashmir is burning and UN’s response has been immensely disappointing and despite holding three informal sessions at the Security Council, no declaration or presidential statement had been issued. This, he added, is a clear display of the UN’s dereliction from its core obligations of maintaining global peace, he said.

He said that with the support of friendly countries Pakistan can table resolutions in the Third, Fourth and Sixth Committees of the UNGA; highlighting in it Kashmiris right to self-determination, decolonization and the illegal dimensions of India’s actions, respectively.

The President, as the chief guest, made these comments while speaking to a Kashmir webinar hosted by the Jammu and Kashmir Self-Determination Movement International. The event was chaired by Debbie Abrahams MP All Parties Kashmir Parliamentary Group in the British Parliament.

President AJK in his initial remarks paid tribute to Raja Najabat Hussain, Chairman Jammu and Kashmir Self-Determination Movement International and the British All-Party Parliamentary Group on Kashmir for consistently focusing on the Jammu and Kashmir situation. He also thanked the Labour and Conservative Friends of Kashmir groups and the Lib-Dems MPs for their advocacy of the Jammu and Kashmir dispute.

The AJK President said that the situation in Indian Occupied Jammu and Kashmir (IOJK) is very dire and is deteriorating every day. He added that extrajudicial killing, custodial killings and arbitrary arrest are increasing exponentially and there are countless insistences of enforced disappearances, sexual molestations and violence against women. “Thousands of young men including children are hoarded into concentration camps where they are being tortured”, he said.

The Indian Government is carrying out genocide and ethnic cleansing in the occupied territory. This, he said has been mentioned by the US-based Genocide Watch. Not only this, India continues to carry out frequent ceasefire violations along the Line of Control, which is wreaking havoc on the innocent civilians living in AJK.

He also warned of the inexorable and rapid transfer of population taking place in IOJK. “Since April 2020, 1.7 million illegal domiciles have been granted to Hindu Indian citizens. India is, in fact, preparing for a fait accompli by taking these draconian measures, calling it ‘the final solution’. They are replicating the playbook of the Nazi’s and Israeli’s by creating new settlements”, he said.

After August 5, 2019, he said, the international media and global community had actively raised the issue of Kashmir and castigated India for its unilateral actions. Unfortunately, the attention has dwindled due to other global issues that stole the limelight, he said. Social Media is considerable active on Kashmir and we continue to get posts and footage of countless human right violations being committed in IOJK.

The President said that we need to create a critical mass and critical pitch for the Kashmir issue in order to make Kashmir a global movement. He said that space for communication and diplomacy has not shrunk and we should continue to use these avenues for highlighting the plight of the Kashmiris.

The UN human rights commission and other global organizations including parliamentary groups have criticized India’s reign of terror unleashed in the Occupied Territory. Recently 14 US congress members have written to President Donald Trump to declare India as a country of particular concern in regards to religious freedom.

The President said the unresolved Kashmir issue could become a nuclear flashpoint and the international community must take action to ensure global peace and security. He said that bilateral talks with India have yielded no concrete results. “This matter is a trilateral issue and the Kashmiris are an integral part of the dispute. No talks would be successful without the inclusion of Kashmiris”, maintained Masood Khan.

President Khan said that the Human Rights Council has yet to act on the advice of the High Commissioner for Human Rights for sending an impartial Commission of Inquiry to Jammu and Kashmir. He said that unlike India, both Pakistan and AJK would welcome the Commission to Azad Kashmir.

Raja Najabat Hussain informed that JKSDMI has initiated in UK a peace campaign and in November a similar campaign would also be started in Pakistan and Azad Kashmir. He said that in conjunction with other Kashmiri NGOs they would also continue to hold seminars for young parliamentarians and human right activists. He said that Jammu Kashmir Forum France would also organize European Convention of Kashmiris and Parliamentarians from all over the world by the end of this year.

Security beefed up in AJK ahead of Jashan e Eid Milad-un-Nabi...