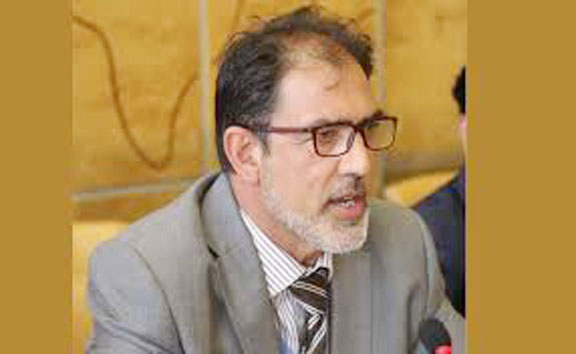 Islamabad:  (Parliament Times)   On the occasion of International Peace Day, Chairman Kashmir Institute of International Relations (KIIR) Altaf Hussain Wani has reminded the United Nations and the influential world governments of their moral and legal obligations vis-a-vis the settlement of the Kashmir dispute to ensure permanent peace in the troubled region.

In a statement issued here on Monday the KIIR chief while underling the UN’s critical role in maintaining International Peace and Security said that it was the prime responsibility of the highest forum to prevent conflicts, safeguard peoples’ fundamental rights and create a violence-free atmosphere, where people regardless of their race, color and creed could live peacefully without any fear.

Over the decades, Mr. Wani said, the UN had played a pivotal role in ending numerous conflicts but it has miserably failed to implement its own resolutions on Kashmir that call for a holding a referendum in the region. “Had the UN implemented its proposed roadmap on Kashmir there would have been no bloodshed or violence in the territory”, he said adding that it was this lingering dispute that on one hand continues to threaten the Kashmiris’ lives and their livelihood while on the other it poses a serious threat to peace and security in South Asia.

Referring to India’s state terrorism in the occupied Jammu and Kashmir he said that the UN’s motto of “Long live absolute world peace” could be materialized in real sense only if this deadly conflict, which had consumed tens of thousands of lives, was resolved as per the universally accepted principle of right to self-determination.

Highlighting the humanitarian aspect of the lingering dispute Mr. Wani said, “Since several decades people of Kashmir have been the worst victims of this long-drawn conflict; they are being killed, maimed, murdered, harassed and humiliated by the Indian troops, day in and day out”. Terming peace as the key to socio-economic development, progress and prosperity, he said, “In our world today, there are many countries who have miserably failed to live up to these noble ideals of peace. India, ostensibly, is one of these nations that has emerged as the biggest threat to peace”.

Citing the rising tide of Hindu Nationalism, racism and state violence within the Indian society, he said that under Modi’s government India has become insecure and unsafe for minorities especially Muslims and Christians”, he said.

Voicing his concern over India’s expansionist designs in the Kashmir region he said that a new regime of laws enforced meant to change the demography of the state has further aggravated the volatile situation and the vulnerability of the marginalized Kashmiri masses, who were fighting for their legitimate cause guaranteed to them by the international community as well as the leadership of India and Pakistan.

As the world observes the Peace Day today, the KIIR chairman said, it was high time for the world to stand up to secure and safeguard rights of the marginalized groups, communities and nations like Kashmir who are reeling under tyrannical clutches of the Indian occupation.

All set to celebrate 73rd Founding Anniversary of AJK government on...