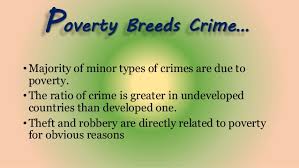 Like many other crimes and offences , the street crime has broken its all previous records challenging the writ of security departments. Over past six months, after the spread of pandemic , the poverty line has increased upto record breaking levels, leaving thousands of thousands people at the mercy of leaders. In lockdown various businesses got closed because of the fatal disease of corona.  The once wealthy people came down on the roads owing to multiple setbacks. What to talk of already broken people? Infact,  this situation paved the way for the people to adopt adverse options for their survival. Resultantlty,  offences  like robbery, mobile snatching, kidnapping, illegal drugs trade, pick pocketing, jewellery, murders, sexual harassment and so on became order of the day. Moreover,  its poverty behind all the odds we are witnessing. Unfortunately, people are being victimized ,  targeted  by these poverty struck affectees. Government must cure their grievances so as to protect its citizens from being the victim . Therefore , a relief package ought to be announced to bring decrease in street crimes and poverty in particular since, its believed that poverty is mother of all crimes.