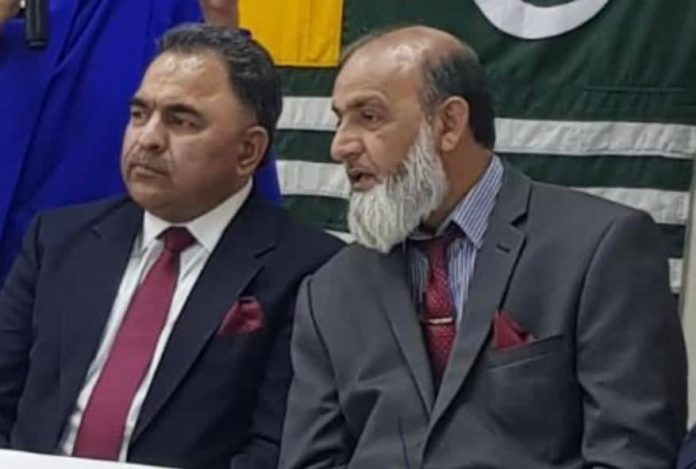 the frequent unprovoked Indian firing and shelling at various sectors including Tattapani. Dara Sher Khan, sectors at the LoC in AJK State which claimed a life of minor girl besides injuring of a 75 year old elderly man and two local lads..

Chairing the quarterly meeting of the organization in his organisation’s head office in London Sunday morning, the GPKSC Chief Raja Sikander Khan condemned occupational Indian troops in the IIOJK for targeting the civilian populous areas at the LoC. He described it cowardly act by the Indian occupying troops in the world acknowledged disputed Indian occupied state, says a message reaching and released to media here Sunday evening.

Khan observed that by resorting to frequent unprovoked firing at the LoC the Indian occupying military and para military forces were violating international norms and commitments by deliberately violating the ceasefire agreement and targeting the unarmed civilians, especially women and children. “It is a nefarious move by India to divert the world’s attention from the situation in the bleeding Indian Occupied Jammu and Kashmir, he added.

The GPKSC Chairman said that the continual hostile tactics by India could neither stop the IIOJK from their 73 years old fight from freedom nor can the world be deceived from the continual – rather increased human rights abuses in the internationally acknowledged disputed Indian Illegally occupied Jammu Kashmir State.

Quoting independent reports pouring in from the bleeding IIOJK, Raja Sikander said that over a million of Indian military and para military troops were involved in the worst human rights abuses, massacres of innocent people and war crimes against humanity in the bleeding occupied Jammu and Kashmir valley.

He paid tribute to the unparalleled sacrifices of the Kashmiri youth and express the hope that the great cause for which they are making sacrifices will surely be achieved. He appealed to the international community, including the United Nations, to take notice of India’s heinous crimes, worst human rights abuses and aggression against the peaceful civilian population of Azad Jammu & Kashmir

Speaking on this occasion, the GPKSC President Kala Khan and the organizations’ AJK Chapter’s President Syed Shabir Hussain said that in order to hoodwink the external world of their crimes and divert the world’s attention from the overall worsening situation in the IIOJK, the Indian occupying forces were continually targeting the citizens of Azad Jammu Kashmir dwelling the areas close to this side of the LoC, he added.

Paying glorious tributes to the valiant armed forces of Pakistan, especially the Pakistan Army soldiers for responding to the cowardly Indian aggression with a befitting reply to the unprovoked Indian firing and shelling at various sectors at the LoC in Azad Jammu Kashmir,

Strongly condemning the reign of Indian state terrorism in the turbulent state by the Indian forces in Illegally Occupied Jammu and Kashmir, Kala Khan said youth were being martyred, maimed and injured in fake encounters by the Indian army, the message concluded..

Daily Parliament Times - September 24, 2020 0
S.A Haidri: ISLAMABAD,(Parliament Times): Ulema have denounced attempts to exploit religious sentiments for causing a sectarian upheaval in the country and called on the government...