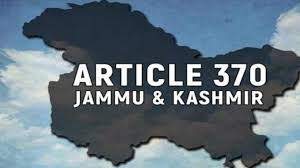 Usama Nizamani
Ascending to Ganga Choti from Sudhan Gali in a 1981 Land Cruiser, with Rehan, the driver of the 4×4 Jeep, I asked, “Are tourists visiting from outside?” I had intended to inquire about the inflow of foreign tourists. He replied, “They have started arriving after ease in pandemic restrictions.” I asked again, sensing my previous choice of words was vague, “Are foreign tourists also visiting lately?” Rehan replied, “They started coming in months before pandemic…” he paused and added, “But most are coming from Pakistan, lately.” The words, “from Pakistan”, when used by Kashmiris to refer to Pakistanis evoke
among the latter, often making them think that Kashmiris do not intend inclusion with
Pakistan. However, consciousness of this Kashmiri identity was left inside with exuding wisdom and we now know why proclaiming exceptionalism of this identity has become so important. The answer lies in the not-so-distant event of August 5, 2019, when India revoked Article 370 and 35-A in Indian Illegally Occupied Jammu and Kashmir (IIOJK), a move, which undertakes forceful unravelling of the Kashmiri identity, and its saturation with an imposed Indian identity. This was the very rationale behind India’s move to illegally annex and convert IIOJK into a Union Territory. This conversation took me back a couple of days ago, to a moment of reflection, when I arrived with my family at Chikkar, a picturesque valley in Azad Jammu and Kashmir, to spend independence holidays. The reflection was eerie, yet that of gratitude, as I gazed upon the mountain with houses adorned like baubles on a Christmas tree. Despite sharing a common faith and a nearly common culture, Pakistanis are prohibited from buying property in Azad Jammu &amp; Kashmir (AJK). I had a reassuring thought, that Kashmiri culture and identity remains free
from tampering, here at least, unlike their sisters and brethren across the Line of Control. Yet this unsatisfying reassurance, made way for the discomforting reality, that Kashmiri identity is under obvious threat of being erased and concocted with larger identity indiscernible from the genuine Kashmiri identity in IIOJK. This perhaps, is the most quintessential question observers internationally are failing to ask. The quest for a ‘Hindu Rashtra’ (state), with unapologetic motivation, is driving Bharatiya Janata Party (BJP) and its ideological patron, the Rashtrya Swayam Sewak (RSS) by changing the ethno-religious
and cultural make-up of Kashmir into a state of near oblivion. These ongoing, systemic measures by India warrant the need for international readers to understand diametrically opposite circumstances in AJK and IIOJK. It’s part-convenience for outside readers, due to my national origin, to brush away these observations, and part-intellectual laziness to see AJK and IIOJK as parts of Kashmir controlled by both Pakistan and India, respectively. The reality on ground, however, is much different on the two sides of Jammu and Kashmir. To begin with, I have, like many Pakistanis, visited Swat Valley in 2014, when the
area had been cleaned up from terrorists. The presence of pickets, for security of the public and re- establishing state’s writ, was established at nearly all important entry and exit points. Thorough checking of vehicles and registration of visitors was the norm. Most importantly, the tension in towns and villages had not debilitated by then. Swat Valley, by the year 2020 is much different; sans the pickets and mandatory need for registering visitors’ names, not to mention the hustle and bustle of domestic and foreign tourists.

Denial of acting upon SOPs by shoppers in AJK appeared;