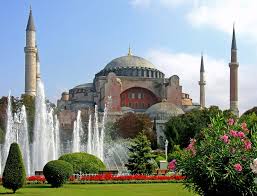 Recently, the top administrative court of Turkey has ruled that Hagia Sophia, a political symbol that has anchored the secular identity of the Republic of Turkey for decades, shall be converted from a museum to a mosque. Soon after the ruling, Turkey&amp;#39;s President announced first prayer to be offered was the Jumma prayer. This step of Erdogan &amp; government is criticized internationally and considered an attack to the secular ideology of Modern Turkey that was established by Mustafa Kemal Ataturk in 1923,
whereas, Erdogan rejected the international criticism as an attack to Turkey &amp; sovereignty. It is considered that the intention behind this conversion is to put an Islamist base to modern secular Turkey and an initiative to re establish the khilafah in the subcontinent, whereas the reality is far different from this, as Erdogan is playing religious politics actually. A poll was conducted in June where 70 percent of people called this conversion an attempt by government to divert people’s attention from the economic
malaise and to reverse its declining support. In his earlier statement during local election campaigning, 2019, Erdogan had a different opinion about the conversion of Hagia Sophia, when asked by crowd about it, he answered satirically by saying that the adjacent Sultan Ahmad Mosque (Blue Mosque) is almost empty during prayer times, first you should consider filling this, and then a thought could be given to Hagia Sophia. This conversion is for nothing but to serve the political interests of Recep Tayyip Erdogan. The first interest is to increase his power base among the conservatives by meeting one of their longest symbolic demands. The second interest that Erdogan’s government has tried to secure the
diversion of public’s mind from the socioeconomic problems of the country. Turkey’s economy that was reeling from the currency and debt crisis of 2018 is further hit by ongoing Covid-19 pandemic. Statistics have shown that the unemployment rate in the country has reached to 24.6 percent and inflation rate is also increased by 25 percent thus resulting Turkey’s economy into a recession. The third and the most
important interest is to start an identity battle between secularists and conservatives, this is the place where Erdogan ‘s rule is most secure. The politicisation of the Hagia Sophia may give Erdogan a new lifeline to secure his power in the country but muslims around the World need to understand the real intention behind the conversion of Hagia Sophia that is not religious but of political gain, therefore, Muslims need to stop celebrating it as a joy and should condemn this step for a reason that religion should not be used for political purposes.

(-The writer is a Student of Law at International Islamic University.)

The dilemma of Politicized Bureaucracy

How is Nationalism Fatal for World Peace?