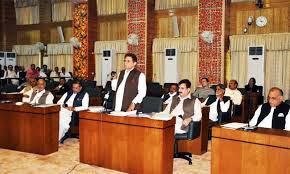 MUZAFFARABAD:   (Parliament Times)    The Azad Jammu and Kashmir (AJK) government led by Prime Minister Raja Farooq Haider Khan has presented its fourth budget proposal in the house on Thursday with a record outlay of Rs. 139.5 billion for the next fiscal year.

According to an official post-budget handout, issued here on Friday, the government proposed Rs115 billion for recurring expenditures and Rs24.5 billion for Annual Development Program (ADP)

Total 14.8 percent increase on the current years’ budget has been proposed by the government in the next fiscal year. However, the development expenditures proposed in the budget were the same as in FY 2019-20.

Rs2.92 billions was earmarked under the Ministry for Kashmir Affairs’ Public Sector Development Program (PSDP) for AJK Legislative Assembly Complex, Medical College Muzaffarabad, Mirpur-Lesswa Keran bypasses and Rathuwa Haryam Bridge Projects. Another new and mega project amounting to 3.6 billion rupees for the rehabilitation of Indian firing affectees included in the PSDP. Rs. 564 millions have been allocated for it in the next fiscal year.

Rs. 3 billion has been proposed for the ongoing rehabilitation and reconstruction program in the quake hit areas of the state.

The projects of the extension phase II, Divisional Hospital with 500 beds strength, 200 beds capacity General Hospital Rawalakot and THQ Pattikha Phase I were also included in the next ADP. Moreover, construction of hostels for doctors and nurses with DHQ Haveli, 30 beds Tehsile Hospital Leepa and establishment of Cardiac Unit along-with Abbas Institute of Medical Sciences and DHQ Hospital Bagh were also proposed in the budget to provide best healthcare facilities to masses.

Rs. 229.8 millions proposed for the treatment facilities of COVID-19 pandemic during the current fiscal year. However, Rs. 200 millions were set-aside for the FY 2020-21.

To provide better traveling facilities to the public, 640 kilometer long roads connecting AJK with Pakistan and district and tehsils would be accomplished in the next financial year. Moreover, work on Authmuqam-Kail Tao Butt road has been initiated. 725 kilometer long link roads would be developed. A project costing 5 billion rupees has been included in the development program to promote tourism and trade activities in the region.

Promotion of the technical education and skill development fund costing one billion rupees has been setup. Youth of the state will be given technical training in the reputed institutions in Pakistan to enable the youth to grab foreign employment. A poly-technical college is being setup in Bhimber while a military college has been proposed in the next financial year.

Under the development program agriculture machinery, seeds and fertilizers would be provided to the farmers on subsidize rates. 270 new dairy forms would be setup to promote livestock production in the liberated territory in the next fiscal year.

Work on 4500 different type of projects would be executed in FY 2020-21under the umbrella of Local Government and Rural Development Department (LGRD).

Parliament Times - March 4, 2021 0
ISLAMABAD:     IG Punjab and Chief Secretary Punjab have recorded their statements in Election Commission (EC) on irregularities in by polls in NA 75. IG...