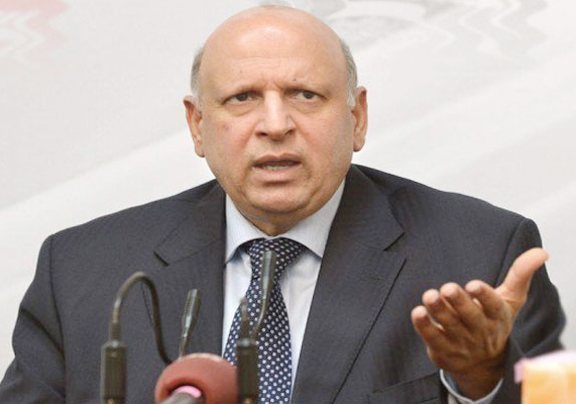 Lahore: Pakistan has acquired profound success on diplomatic front regarding highlighting Kashmir issue after contact between Governor Punjab Chaudhry Mohammad Sarwar and members of European Parliament. Fabio Massimo Castaldo, Vice President of European Parliament, who had recently visited Pakistan, and 15 other members of European Parliament have written letter to President and Vice President of European Commission of Human Rights to take notice of blatant violation of human rights in Kashmir by India. Governor Punjab has written letter to these MPs and offered thanks to them for standing with people of Kashmir. Governor Punjab said, “This is biggest success of Pakistan, our government, Foreign Minister and Prime Minister Imran Khan”. He also acknowledged efforts of Pervaiz Locer, President of Friends of Europe think-tank and Wajid Khan, youngest mayor of Britain, who have contributes allot towards highlighting Kashmir cause.

Governor Punjab Mohammad Sarwar told Press conference on Tuesday in Governor House Lahore that letter is big step towards exposing oppression of Indian government against Kashmiri people and Indian Muslims on international level. He wrote in letter, “I am deeply grateful to you and your colleagues (Members of European Union Parliament) for raising their voice against the grave human rights violations, abuse & discrimination of the people of Kashmir & the Muslims living in India by the Narender Modi Government”. Governor Punjab added, “Just recently, we read Marie’s (Chairwoman of European Parliament’s Subcommittee on Human Rights)letter drawing attention to the intimidation, harassment & terrorism charges being used to silence peaceful protestors under the UAPA [Unlawful Activities Prevention Act] – a law that authorizes the government to declare individuals as terrorists”. Sarwar added, “We request the European Union & the International Community to take notice of the 300 days military siege & inhumane lockdown imposed by RSS backed Modi Government after India revoked the special status of occupied territory on Aug 5 2019” .He also written, “It is evident that India is trying to refrain the Kashmiris & Muslims in India from their “Freedom & Fundamental rights” by committing major crimes namely the Genocide of Kashmiri innocent Muslims and the Religious / Racial Discrimination and Forced Demographics changes, in violation of Geneva Convention and United Nations Resolutions, and International Humanitarian law”. Governor Ch sarwar wrote, “We urge the European Commission’s President Ursula Von Der Leyen and the Vice President including all International leaders to recognize the draconian laws & egregious abuses of human rights in Kashmir and to take practical steps that will end the atrocities and persecution of Kashmiris and the Muslims in India. As a former member of the British parliament, I know that the European Union has always played a key role in addressing international issues especially the Kashmir conflict where we must support their ‘Right to Self Determination’. For peace and stability of the region and South Asia, a peaceful solution to Kashmir as per the UNHRC reports of 2018 and 2019 must be sought. Thank you for your time & for your kind consideration and once again accept my appreciation of your efforts”