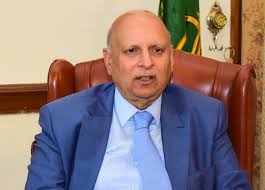 Lahore:    Punjab Governor Chaudhry Mohammad Sarwar has said India cannot change the disputed status of the Indian Held Kashmir through its plan of new domicile law.Since Indian Hindus are massacring humanity, the governor appealed that the United Nations, the US and other world bodies to play their role to stop genocide in Kashmir as the world witnessed in Bosnia. “The history will not forgive those, who will not play their due role in stopping Muslims’ genocide in Kashmir and India,” he said.The governor strongly condemned terrorism in Balochistan and added that the whole nation was standing with those who laid their lines in the line of their duty while fighting war against terrorism.Governor Chaudhry Sarwar was speaking to a delegation led by provincial minister Mian Mahmoodur Rasheed, PTI central Punjab president Ejaz Chaudhry and Mirza Safdar Jaraal from Azad Kashmir that called on him at Governor’s House on Tuesday.The governor said India had completely failed in suppressing the voice of Kashmiris despite imposing worst ever ongoing 289 days’ curfew in the valley. And now under new plan, he said, the India was trying to settle Hindus in Kashmir and offering them Held Kashmir domiciles to convert majority Muslims into minority.Stating that India’s this move was a threat to peace in the region, Chaudhry Sarwar stressed that the United Nations and other world bodies should break their silence and stand with the Kashmiris and stop India from introducing new domicile law.He said the Naerndra Modi government in India and put peace under constant threat as its war hysteria was increasing. He said all minorities including Muslims in India had become unsafe as the RSS goons on the behest of Narendra Modi massacring minorities.The governor expressed his grief over the martyrdom of Pakistan Army men in terrorist activities in Balochistan. He said the whole nation was standing with the army men in their war against terrorism to defeat terrorists and create peace in Pakistan.

IF OUR SOVEREIGNTY IS CHALLENGED, OUR RESPONSE WOULD ALWAYS BE SWIFT AND RESOLUTE: AIR CHIEF