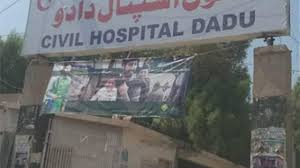 DADU. The hospitals and Isolation wards in Dadu district are without ventilators.

While, the four ventilators are not functioning in the hospitals of Dadu district since 2010.

100 beds were arranged at Isolation wards established at hepatitis center Dadu, civil hospital Dadu, taluka hospitals KN Shah, Johi and Mehar but there is not a single ventilator and none functioning ventilators are not repaired to operate.

Citizens showed a fear that due to not running of the ventilators, the deaths of patients of Corona virus –COVID-19 can be occurred or they can face difficulties, in the emergency.

“The budget of million rupees was utilized in the name of fighting with COVID-19, but ventilators are not repaired and proper facilities of bath room, diet was not available at Isolation wards in Dadu, KN Shah, Johi and Mehar hospitals “ “said a citizen, Mohammad Khan”.

“On daily base, budget was being passed through fake bills from district accounts office and treasury in the name of facilitating the COVID-19 patients but all Isolation wards and hospitals lacks basic facilities” “said a civil society activist Ghulam Nabi,”

In this regard, DHO Dadu, Dr Zahid Hussain Dawachh said that the ventilators placed, two at civil hospital Dadu, one at KN Shah and one at Mehar taluka hospitals are out of orders. He said that there are two reasons, one is there was no trained staff to run them and secondly they needs to repair. DHO Dadu said that total 100 beds were arranged at Isolation wards at civil hospital Dadu, taluka hospitals KN Shah, Mehar, and Johi at hepatitis center Dadu.

Medical Superintendent Mehar taluka hospital Dr Hameed said that two Isolation wards comprising on 13 beds for COVID-19 patients but it requires the ventilators for face any untoward situation or emergency.