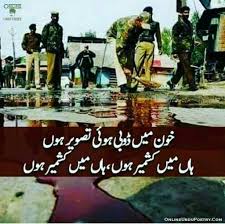 The valley of Kashmir is ample by poets pertained to diverse subjects English , Kashmiri , urdu etc .Among all ,the Kashmiri glorious poet was Mehjoor .He has a place of honor among the poets of Kashmir. He is especially noted for two things. First, he introduced a new style into Kashmiri poetry. Second, he introduced a new thought into Kashmiri poetry. Mahjoor wrote poems of freedom and progress in Kashmiri.

These songs awakened the sleeping Kashmiris. He came with a new voice and a new (literary) form. Mahjoor was a poet of 1ove and communal harmony. In his earlier days, he used to write only love poetry, but (later) he also wrote forceful poems about freedom. Mahjoor&#39;s real name was Ghulam Ahmad. But as a poet, he adopted the pen name &#39;Mahjoor&#39;. He was born in eighteen hundred and eighty-five in Metragam. He has written poetry in Persian and Urdu as well. Mahjoor worked as a patwa:ri: (pathva:r&#39;) in Kashmir. Along with his official duties, he used to write poetry in Kashmiri. Mahjoor had his first Kashmiri poem published in 1918. After this, he composed poetry only in Kashmiri. His songs became very popular. He wrote on such topics as love, communal harmony, and social reform, and also wrote on the plight of the Kashmiris. He wrote about youth, the flowers of Nishat Garden, a peasant girl, a gardener, the golden oriole, and a Free Kashmir.

At that time, such songs were unknown in Kashmiri poetry. It was Mahjoor who gave these to us. Mahjoor was sixty-seven years old when he passed away in 1952. The death of Mahjoor was a great loss to both the Kashmiri language and (Kashmiri) poetry. But, Mahjoor&#39;s songs are still on the lips of every Kashmiri. Through these songs, his name will live forever. In 1914, Mahjoor started contributing his eternal verses in Kashmir and he for the first time wrote a lyric or a love poem in the style of Rasool Mir. He persisted with his mission of writing in Kashmiri and in the style of Wordsworth wrote many lyrics romantic in taste and with the depiction of nature as their background. One among these famous lyrics is ‘Bage Nishat ke Gulo’ the verses of which please and put an excitement in the hearts of the readers. The following eternal verses of the poem remind us about the richness and beauty of our land. “Bage- Nishat ke Gulo. Naz karan karan walo. Sael Daluk ch wuch bahar- Bage- Nishat wa Shalimar” Mahjoor has a deep interest in the bounty of nature in Kashmir and he invariably depicts the scenic gardens, moors, forests, waterfalls, rivers, lush green fields and mountains as a source and means of conveying his heartfelt emotions and messages to awaken his countrymen to raise their voice against all kinds of injustices and ills perpetuated against them. He expresses his emotions like this, “Bulbulan Dup Gulls Hussan Chui Pur Keyha wanai, zew chai ne, su chui kasur” Through his verses in Kashmiri, Mahjoor offered a lot of fire and ignition to the freedom struggle during the barbarous Dogra regime. His poems gave impetus to the struggle and served as a clarion call to the masses to free their nation from the chains of slavery. He express his patriotic fervor in the poem “Walo Ho Bage-e-Wano” (Arise, O Gardener) and stresses upon his fellow countrymen to decorate their nation and land with flowers which symbolizing their apt traditions based on honesty ,truthfulness and dignity. He say’s, “Wala Ho Bage-wano Naw Baharukh Shan Paida kar Pholan Gull Gat Karan Bulbul Tututhi Shamane Paida Kar” In other beautiful poem, “Gulshan Watan Chu Souni” Mahjoor expresses his love for his nation and breathes out the idea symbolically and that too with sincerity and pride that there is nothing dear to him than his nation and he wishes fervently it to prosper and become a dignified nation. This spirit of Mahjoor was appreciated and liked by Iqbal even and he had due regards for him for representing the sentiments of Kashmiris.

Mahjoor pays glowing tributes to his nation in these lines, “Bulbul Wanan chu poshan Gulshan watan chu souni Andi Andi Safaid Sangar Deware Sange Mar Mar” Mahjoor also appeals to the nation to maintain communal harmony and not get divided on the basis of religion and community. He asks his nation to shun the path of strife with each other and adieu jealousy, hatred, animosity and remain united against the enemy and share love and affection with each other. He says, “Nai Traiu Mai Thaiu Panween Puz Mohabat Bagruew paneween, Dudh chu muslim hund chu shaker saf saf Dudh te bea shaker ralaew pane waeween” Mahjoor conveys his message through these famous verses in Mathew Arnold’s fashion who in his masterpiece poem “Dover Beach” also advises his contemporary nineteenth century society and people to come out of the melancholic situation which had entwined them and made them to suffer from bewilderment, contradictions and had disturbed their minds with confusion and chaos resulting in the bickering and squabbling among them.

Are China and Russia Strengthening Iran?