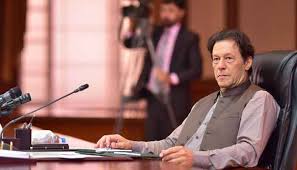 PM Imran, in a tweet said: “Demonstrations in various parts of the world are now going on against lockdowns during a pandemic – despite [provision] of medical, financial, communication & food assistance.””Perhaps now [the international] community can understand the suffering of Kashmiris in IOJK as they suffer brutal oppression,” he said, calling on global powers to initiate action against Indian oppression in Kashmir.

Slamming the Bharatiya Janata Party (BJP)-led government, he said that they have “ensured” that the Kashmiris remain in distress and deprived “under an inhumane politico-[military] lockdown continuing for over 8 months now without any provision of medical, financial, communication or food assistance”.The Muslim majority region has been under a strict lockdown since New Delhi stripped it of autonomy and statehood in August.

Authorities have detained thousands and introduced one of the world’s longest-running internet shutdowns, only restoring limited 2G mobile internet in January.

Despite pleas from several rights groups to completely ease restrictions, the Prime Minister Narendra Modi government has refused to do so. Reporters Without Borders (RSF) in its latest World Press Freedom Index report has noted that it has become “virtually impossible” for journalists to report from the Indian occupied Kashmir (IoK) and pushed India two spots down from last year to 142.

The report noted India’s score in this year’s index was heavily affected by the situation in IoK as India has made it “virtually impossible” for reporting after New Delhi revoked the region’s autonomy on August 5 of last year.

While noting the difficulties for reporting from the region, the group called Kashmir a “vast open prison” due to shutting down of fixed line and mobile Internet connections by the Narendra Modi-led government.

The RSF also stated that there were constant press freedom violations in the country, including police violence against journalists, ambushes by political activists, and reprisals instigated by criminal groups or corrupt local officials.

“Ever since the general elections in the spring of 2019, won overwhelmingly by Prime Minister Narendra Modi’s Bharatiya Janata Party, pressure on the media to toe the Hindu nationalist government’s line has increased,” said the report.India passed a new law last year that grants citizenship to religious minorities fleeing from Muslim-majority countries — Pakistan, Afghanistan and Bangladesh — but excludes Muslim immigrants.

The new legislation, known as the Citizenship Amendment Bill, is an amendment to India’s Citizenship Act 1955. It proposes to grant nationality to Hindus, Sikhs, Christians, Buddhists, Jains and Parsis, who arrived in India before 2015 but not Muslims.

Thousands of people — who see the law as anti-Muslim — have taken to the streets in India against the CAA triggering violent unrest. A southern state imposed curbs on public gatherings to pre-empt further demonstrations.

Many university students who were protesting against the bill were arrested by the authorities as well.