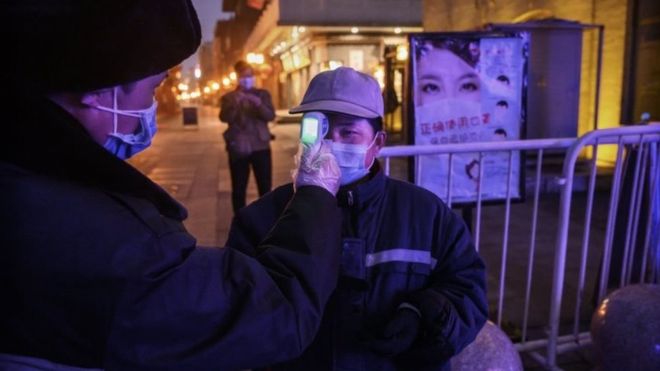 Hubei:    Some 242 deaths from the new coronavirus were recorded in the Chinese province of Hubei on Wednesday – the deadliest day of the outbreak.
There was also a huge increase in the number of cases, with 14,840 people diagnosed with the virus.
Hubei has started using a broader definition to diagnose people – which accounts for most of the rise in cases.
Until Wednesday’s increases, the number of people diagnosed in Hubei – where the outbreak emerged – was stabilising.
But the new cases and deaths in the province have pushed the national death toll above 1,350 – with almost 60,000 infections in total.
Meanwhile, the Communist Party secretary in Hubei, Jiang Chaoliang, has been replaced by the Shanghai party chief, Ying Yong, according to state media. The party chief of the capital city Wuhan has also been relieved of his duties.
It is the first major change of Hubei party officials since the outbreak began.
Earlier this week, a number of health officials were “removed” from their jobs.
The province – which accounts for more than 80% of overall Chinese infections – now includes “clinically diagnosed cases” in the number of confirmed cases.
This means it includes those showing symptoms, and having a CT scan showing an infected lung, rather than relying only on the standard nucleic acid tests.
Of the 242 new deaths in Wuhan, 135 are such “clinically diagnosed” cases.
That means, even without the new definition, the number of deaths in Hubei on Wednesday was 107 – a new high for the province.

The province’s 14,840 new infections include 13,332 clinically diagnosed cases.
Overall, the province now has 48,206 confirmed infections.
A cruise ship carrying more than 2,000 people has docked in Cambodia – after it was turned away by five ports over fears that some passengers might be infected with the virus.
The MS Westerdam arrived on Thursday morning after Japan, Taiwan, Guam, the Philippines and Thailand had all refused to accept the ship – despite having no sick patients on board.
Meanwhile, another 44 cases have been confirmed on the Diamond Princess, which is in quarantine in Yokohama, Japan.
The increase means 218 people of the 3,700 people on board the ship have caught the virus. Not everyone has been tested yet.
People with the virus are taken to hospitals on land to be treated, while those on board are largely confined to their cabins.
The WHO said it was “way too early” to predict the end of the epidemic. “This outbreak could still go in any direction,” the director-general warned.
The WHO has been able to track down the source of transmission in all but eight of the 441 cases of the virus outside China, its head of emergencies Michael Ryan said.
He added: “I think it’s way too early to try to predict the beginning, the middle or the end of this epidemic right now.”
On Tuesday top Chinese epidemiologist Zhong Nanshan said the epidemic should peak in China this month before subsiding.
Four possible vaccines were being funded for pre-clinical development, WHO Chief Scientist Soumya Swaminathan told reporters.
“I think we will find a vaccine,” she said. “It will take some time. A vaccine cannot be made overnight.”
* The world’s largest mobile phone showcase, Mobile World Congress (MWC), has been cancelled, organisers in the Spanish city of Barcelona have confirmed
* The US Centers for Disease Control said it was preparing for the coronavirus to possibly “take a foothold in the US”. Thirteen cases have been confirmed in the US
* About 300 employees have been evacuated from Singapore’s biggest bank, DBS, after one person fell ill with the coronavirus. All 300 had been working on the same floor and were sent home
* Formula 1’s Chinese Grand Prix, due to take place in Shanghai on 19 April, has been postponed
* In its latest measure to try to halt the spread, China said it would stagger the return of children to school. Several provinces have closed schools until the end of February

Queen Elizabeth responds after Barbados drops her as head of state

Governor Punjab says the government is strengthening Parliament and democracy in...

An Indian diplomat – arrested in Germany for suspicious activities defying...

SUIC launches webinar series under the theme of “Learn, Launch and...

Transformation from Negativity to Positivity