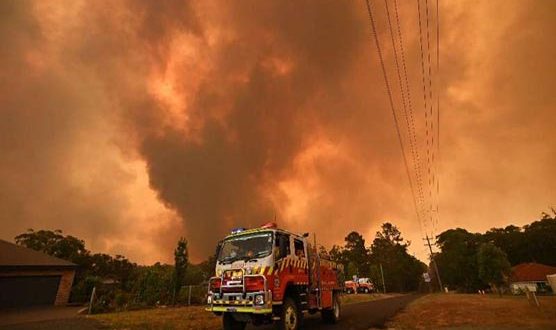 Srinagar and Jammu airports under the security cover CISF

MELBOURNE:        Forecast storms are expected to bring some relief on Wednesday from the huge bushfires scorching Australia but the predicted heavy downpours also carry the risk of landslides and water pollution, officials said on Thursday.
Australia is battling against its worst bushfire season on record, with fires burning since September taking 28 lives, destroying more than 2,500 homes and razing bushland equivalent in size to Bulgaria.
The shift to more humid and wet weather later on Wednesday will likely help control some of the 100 blazes burning across New South Wales (NSW) and Victoria states and potentially even extinguish some, the Bureau of Meteorology said, while also warning the weather change brought new dangers.
“Heavy rainfall and gusty thunderstorms bring the potential for flash flooding, particularly in the burnt-out areas of New South Wales and Victoria which are now vulnerable for landslips and trees coming down,” meteorologist Sarah Scully said in a video posted on the Bureau of Meteorology website.
Authorities have also raised concerns that strong and erratic rainfall after fires can cause water pollution, with debris swept into reservoirs.
The Victoria state capital of Melbourne bore the brunt on Wednesday of smoke haze that satellites operated by U.S. space agency NASA scientists have tracked circumnavigating the globe.
Flights were canceled as the heavy smoke pall shut down a runway at the city’s airport and the start of qualifying matches for the Australian Open tournament, tennis’ first Grand Slam of the year, was delayed for the second day in a row. [L4N29J4MY] Melbourne was ranked No.4 on AirVisual’s pollution ranking for major global cities midway through the day.
Bushfires are common during Australia’s summer months, but this fire season started unusually early, often moving quickly and unpredictably, and leaving swathes of the drought-stricken land a scorched earth.
Following are some highlights of what is happening in the bushfire crisis:
* Globally rising temperatures may make Australia so hot and dry that the country could join the ranks of ‘climate refuges’ a U.S. climatologist and geophysicist told Reuters.
* Prime Minister Scott Morrison, who has faced widespread criticism for poor leadership during the bushfire crisis and his dismissive attitude toward climate change, said adaptation to the country’s environmental situation is key.
* James Murdoch, one of Rupert Murdoch’s sons, issued a statement criticizing the conservative approach to the climate change coverage at the family’s News Corporation and Fox media operations, suggesting a family rift on the issue.
* Australia’s biggest insurers including Suncorp and Insurance Australia Group have put a suspension on selling insurance policies in fire-affected areas as part of an industry practice to prevent panic-buying of insurance policies.
* The NSW Rural Fire Services posted a rare light-hearted tweet ahead of the forecast wet weather. Photographs of a vehicle windscreen wiper stick and an umbrella were accompanied by the note: “We wanted to reintroduce you to a couple of items that you may not have used in some time. With more than 100 fires still burning across #NSW we are hoping we need to use both of these over the coming days.”