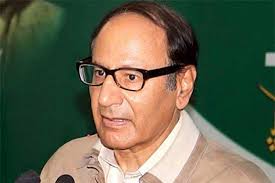 LAHORE:       PML-Q president Chaudhry Sujjaat Hussain said federal cabinet must show a big heart to pull Nawaz Sharif out of ECL. He said political condition would worsen if something happened to Nawaz Sharif.

Shujaat said government should refrain from doing such things that would damage the country. He said there should be no politics on health of any body.
He said uncertainty would create hurdles in the path of progress, adding that anarchy would create problems for masses.