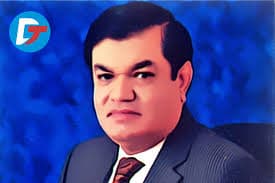 Karachi: (Parliament Times)     President Pakistan Businessmen and Intellectuals Forum (PBIF), President All Karachi Industrial Alliance (AKIA), Senior Vice Chairman of the Businessmen Panel of FPCCI and former provincial minister, Mian Zahid Hussain on Wednesday said the government has no option but to increase tax income and exports to make Pakistan a respected and independent country on the global stage. History suggests that the nations reliant on loans and aids are never respected or heard and they lose the ability to defend themselves from adversaries, he said.

Mian Zahid Hussain said that Pakistan is facing increased challenges, especially on the economic front that can be dealt with by increasing tax base, revenue and exports or we will have no future.

Talking to the business community, the veteran business leader time has changed as now the influential nations are giving paying more attention to financial warfare to continue their dominance. The countries are successfully using their weapons of economic destruction to weaken economics of poor nations to achieve their unholy designs while Pakistan’s economy is not strong enough to withstand economic terrorism.

The former minister noted that a weak economy is of no use even if the military is strong and the country can end up in a mess like the former USSR, Iraq, Syria or Libya. He said that we have the option to make Pakistan a great country by reducing the size of the undocumented economy and consider paying taxes honestly as the sectors having 18 to 20 percent share in the GDP remain out of the tax net which has become an issue of national security. He noted that now improved business climate has little to do with the pleasing business community and a lot more to do with national security as employment and revenue is directly linked to economic activities.

Mian Zahid Hussain said that all the sectors including the industrial sector should discharge their national obligations and play their role in strengthening the economy while the government should introduce reforms and control the smuggling of raw material and finished goods.

Promoting manufacturing has become an obligation as once Pakistan’s exports were more than the total exports of the countries called Asia Tigers. There was a time when renowned economists would say that the pace of development for Pakistan is greater than the speed of development in China, India, Malaysia, and other countries but the vested interests derailed the process for their petty gains.

Pakistan can again achieve what it has achieved in the past for which political will and unanimity among all stakeholders is required otherwise we should be prepared to see increased anarchy, poverty, unemployment, terrorism and slavery, he warned.

Investment must be done for safeguarding child education: Speakers