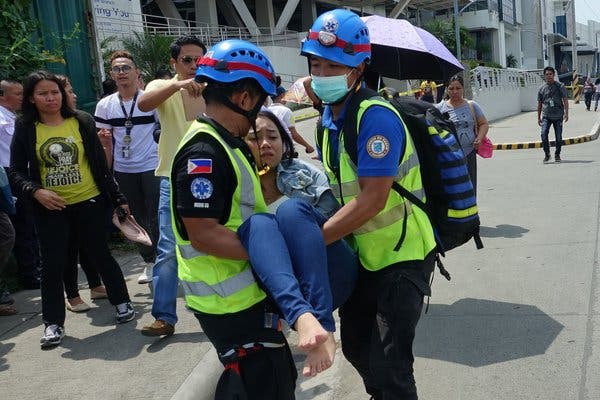 MANILA:      At least two people were killed after a 6.6-magnitude earthquake struck the southern Philippines on Tuesday, just over a week since a strong tremor jolted the same area and left seven people dead.
The quake’s epicentre was located inland northeast of Tulunan town in Cotabato province, 972km (604 miles) south of Manila, the Philippine Institute of Volcanology and Seismology said.
Seismology experts said there were no threats of a tsunami.
A 15-year-old high-school student from Davao del Sur province was confirmed dead after being hit by a hollow blocks during the quake, the public information office of Magsaysay town in the province was quoted by news reports as saying.
CNN Philippines is also reporting that a 66-year-old man died in Koronadal City, South Cotabato after sustaining head injuries during the incident.
A Manila-based radio station also reported that several children in Tulunan were injured when their school collapsed.
The quake was initially reported as magnitude 6.8 but was later downgraded to 6.6.
The quake struck at 9:04am (0104 GMT), rattling buildings and forcing people to rush out of offices, schools and hospitals in the affected areas, according to initial information from the institute and videos shared on social media.
Photos posted on social media also showed a collapsed school building in Tulunan and several injured students.
In an interview with Manila-based radio station DZMM, Renato Solidum, head of the country’s earthquake monitoring agency, warned of more aftershocks.

Iran’s Javad Zarif warns against US ‘sabotage’ and sanctions