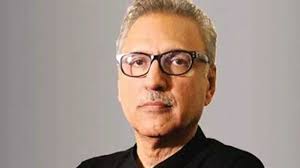 ISLAMABAD:       President Dr Arif Alvi has said the Indian Supreme Court’s record on Kashmir and minority issues had darkened over the last few years as it is following a doctrine of constitutional evasion.
In a series of tweets, the president tagged and commented on an article appearing in a prestigious UK based “The Economist” titled ‘Vale of Tears, The courts’ refusal to curb repression in Kashmir’.
He said Indian Supreme Court looks like a branch of executive facilitating its prejudicial actions, so little hope for Indian Muslims, minorities and Kashmiris.
According to the article, the Indian Supreme Court judges meddled in different issues but yet on the many glaring abuses occurring in the Occupied Kashmir, they have remained resolutely and shamefully silent.
The Indian top court had given a month’s time to the Modi’s government to submit its response to a slew of petitions challenging Indian government’s unilateral and illegal step of stripping the special status of the occupied valley.
The article said with such order, it meant in all likelihood, a further month of detention without trial for the Kashmiris rounded up by the Indian authorities and another month during which the humbler Kashmiris would be deprived of their fundamental rights.
President Alvi appreciated the article by terming it ‘excellent editorial exposing what is happening in Indian Occupied Kashmir and the collusion between the Supreme Court of India and Modi’s actions against the Muslims in Assam and Kashmir.