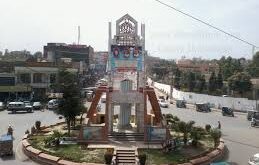 BHIMBER-MUZAFFARABAD:  (Parliament Times)   The Prime Minister Azad Jammu and Kashmir (AJK) Raja Farooq Haider Khan has started visit of all sectors along the Line of Control (LoC) to express sympathy with the victims of Indian unprovoked firing on civilian population.

In the first leg, he visited Bhimber sector on Sunday where he met the victims of Indian unprovoked firing. The Prime Minister while lauding their morale assured them of all out assistance in this critical time.

Addressing a public gathering at Samahni, he strongly condemned the Indian aggression at LoC and said that India couldn’t demoralize the people of the liberated territory and they are firmly standing with their brethren in Occupied Kashmir.

“We are proud of our valiant armed forces that are protecting the frontiers from Indian aggression with active support of local population”, the premier added.

He further said that Indian Prime Minister Narrinder Modi’s designs will push the region towards destruction.

Raja Farooq Haider announced to hold statewide protest demonstration and rallies against Indian forces atrocities on the innocent Kashmiris struggling for their UN acknowledged right to self determination.

The Prime Minister also addressed the local gathering at Jandala, Kisgama near LoC and said that Indian troops are playing with the lives of people in the Occupied Kashmir where they have been subjected to torture and aggression.

“People have been restricted to their homes. They have been disconnected from the world and deprived of their fundamental rights as well as food and medicines”, he added.

“Our brethren Kashmiris are rendering matchless sacrifices for the freedom of motherland. They are fighting guns with stones. It is high time for us to play our due role and do whatever we can for our oppressed brothers and sisters in the occupied valley”, Haider added.

On this occasion, people expressed their profound gratitude to Prime Minister for visiting and expressing solidarity and sympathy with them. They also thanked for the announcement of blacktopping the roads.

During the visit Prime Minister reviewed the damage to the property of Kashmiris living along the LoC by Indian firing and bombing, and assured them of cooperation.

The Prime Minister is also scheduled to meet martyrs families for extending his condolences and sympathy to them. He will pay visits to Kotli, Tata Pani and Abbaspur sectors.