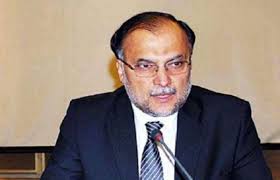 Lahore:                   Senior PML-N leader Ahsan Iqbal said that incumbent government has taken unprecedented loans in the history of country within one year.
Talking to media men on Saturday Ahsan Iqbal said that country is crashing economically, industries are being closed, and people are passing through difficult time.
1
The minister compared the tenures of the PML-N and the PTI-led federal government, and stated that the country had been progressing in the rule of the PML-N.
He accused the PTI of working on a “foreign agenda” as the government has not allocated funds for the China-Pakistan Economic Corridor (CPEC) during the passage of the budget [for the fiscal year 2019-20].
“The general public has been burdened due to incompetency of the current government,” he went on to say, adding that the PML-N has made deal only with the public and the Constitution. “There’s no concept of any deal […] the constitutional way is only to hold new elections,” he concluded.