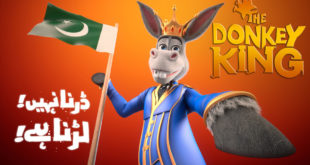 Mangu from ‘The Donkey King’ rallies for fight against coronavirus

Islamabad:                  The Speaker National Assembly Asad Qaiser has said that development of any country is directly dependent on its economic situation.
He was talking to Advisor to Prime Minister on Finance ,Abdul Hafeez Sheikh who called him on in his chamber on Saturday. Economic situation of the country and measure initiated by the government for restructuring of economy and generation of economic activity in the country came under discussion.
The Speaker said that present government inherited messed up economy however the government sagacious handled the situation. He said that immediate measures of the government ushered in strengthening of economy and built investors confidence. The speaker said that government should formulate durable economic policies which should be pro poor and people yielding low incomes should not effect. The speaker praised the steps of government to broaden tax net however suggested for tax reforms and phasing out indirect tax in order to give relief to common man and sustainable economic growth. He also suggested for giving incentives to farming community.
Advisor to pm Dr. Abdul Hafeez Sheikh apprised the speaker about the steps taken by the government for revival of economy and to generate economic activity in the country. He said that as rightly pointed out by speaker the government was focusing on broadening of tax base and taxes would be rationalised to ease the burden of common man. He said that policies of the government would generate economic activity through direct foreign investment which would ultimately reduce the lending by the government. He said that current account deficit has also been reduced due to the fiscal policies of the government.
He informed the speaker that prime minister was committed for reliance on and exploitation of indigenous resources in national development. He informed that farming community would be incentivized so that the country could be self sufficient in food as well as produce raw material for our industries. He also informed the speaker about the allocation of substantial budgetary allocation under “Ehsaas Program”.