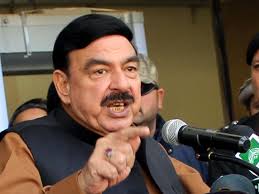 DHIRKOT/MUZAFFARABAD:              Railway Minister Sheikh Rashid has warned if Narendar Modi wages a war against Pakistan then it will not be a traditional war but will be last war.

“ There is old rapport between Lal Haveli and Lal chowk of Srinagar. If Narendar Modi starts war with Pakistan then it will not be a traditional war but will be last war. After this war nor any grass will grow in India nor will bell ring in the temple of Balla Jee”, Sheikh Rashid said this while addressing Kashmir rally in Dhir Kot Saturday.

He went on to say Hitlar Modi has committed a mistake by altering the status of Kashmir. Hitlar Modi has been keeping Muslims in siege since last 20 days but he does not know that Lall Haveli is connected with Lall Chowk of Srinagar. Time will soon tell it.

He held Kashmiris have been rendering sacrificing of their lives since the last 72 years and now they are looking towards us. When Miandad wins cricket match by striking a sixer then Kashmiris express their jubilation over victory of Pakistan.

He remarked “ our army was making preparations for today since the last 72 years.

When turn of Muslims was set in Libya, Yemen, Syria and Palestine then I had informed about it before hand. But now the Muslims will not be deceived.

“ I give message to Srinagar that whatever call comes from Srinagar that call will be for Imran Khan and for all. We cannot trust US. As soon as Imran Khan said doors to dialogue have been closed then some persons are declaring it international agenda. I want to tell these people Kashmiris are very intelligent people. They are not people of Palestine. Whosoever betrays the nation he will be thrown before the dogs. Now all Muslims should stand with Muslims”, he observed.

Declaring the days till March very crucial in the perspective of politics, he said Kashmir issue will become “ are or par” in March.
He requested Overseas Pakistanis to come out of their homes with waving Pakistan flags.

He announced PM Imran Khan will raise voice for the people of Kashmir in UN.