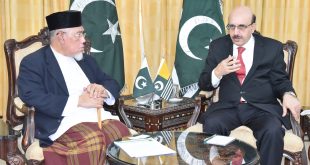 ISLAMABAD:     The controversial video of accountability court judge Arshad Malik, unveiled by Pakistan Muslim League-Nawaz (PML-N) vice president Maryam Nawaz, has been sent to Punjab Science Forensic Laboratory today (Friday).
According to details, the laboratory will analyse whether the audio and video are of the same person of not while it will also evaluate the video under fake editing and electronic forgery aspects.

Sources told that availability of recording device is essential for complete forensic of the content, however, the test is facing delay as Federal Investigation Agency (FIA) has failed to find such equipment so far.
It will take one to two days to complete forensic of the video by using proper tools, they added.
A three-judge Supreme Court (SC) bench headed by Chief Justice of Pakistan (CJP) Justice Asif Saeed Khosa had conducted hearing on petitions to probe alleged video scandal of former accountability court judge Arshad Malik.

During the proceedings, the plaintiff’s lawyer completed his arguments and suggested to form neutral inquiry committee to investigate the matter over which, the CJP said that the court will do whatever it finds suitable. Government also has authority to constitute the commission, he told.

Justice Asif Saeed Khosa said that the judge should have not been blackmailed over the video scandal, adding that irresponsible statements are tragedy of our society as they badly disappoint people. He further hinted at transferring judge Arshad Malik to Punjab.
Judge Arshad Malik had rejected all the allegations leveled by Maryam Nawaz regarding victimizing ex-prime minister Nawaz Sharif in fake corruption cases.
The judge had released his statement and termed the leaked video played by PML-N leaders during their press conference as fake, fabricated and out of context.
Arshad Malik told that he had old relation with Nasir Butt, the person shown talking to him in the alleged video, and his brother Abdullah Butt who used to often meet me.
In an affidavit submitted in the Islamabad High Court (IHC), teh judge revealed, “Hussain Nawaz Sharif, son of incarcerated former prime minister Nawaz Sharif offered me a bribe of Rs500 million for my resignation on the grounds that I “could no longer deal with the guilt of having convicted” Nawaz under duress in the Al-Azizia/Hill Metal Establishment reference.”

Share
Previous MOU signed in the presence of PM AJK to restore peace in Kashmir
Next US destroyed Iranian drone in Strait of Hormuz, says Trump

Islamabad:      Federal Minister for Science and Technology Fawad Chaudhry has said that consensus …