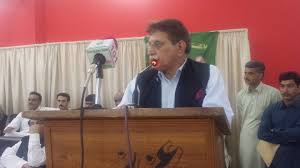 Chakar:    (Parliament Times)      AJ&K prime minister Raja Farooq Haider Khan has said that the upcoming budget of the new fiscal year would be a reflection of people’s aspirations, development in education, health, water supply, and power sectors will be priorities.

Addressing to participants of”Aftar” party hosted by Sheikh Naseem, the prime minister said that the journey of development in AJK would continue according to our vision.

”We have an exemplary understanding with government in Centre and the federal government has released all our funds allocated in the budget in time, ”he said.

Prime Minister directed the concerned departments to complete all the ongoing development projects without compromising on the quality of work and any negligence would not be tolerated in this regard.

He announced the up gradation of health center Chakar into Tehsil Headquarters Hospital, the dream of turning Jehlum Valley into a model district will be realized, he added.

Saving Kashmiris from Indian oppression is our collective responsibility – AJK...

Gilgat-Baltistan On the Horns of a Dilemma

SSC on Commerce says smuggling have reduced substantially due to...