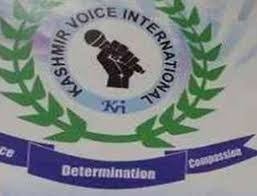 London:   Kashmir Voice International (KVI) in a statement condemned the
continued killings in Kashmir even during the holy month of Ramdan in which ceasefire was
expected from all sides. Every day the bullets are being showered on our youth which is causing
agony to their parents and the society as a whole. It appears that Delhi is determined to continue
the death and destruction in the valley which is a confession of a failure to control the situation.
The government has experimented all the means of repression, killings, torturer and
disappearance but has failed to control the situation and bring peace. It should dawn on the
government in Delhi that the situation could not be controlled by repression and perpetrating
atrocities, instead political means need be employed to solve the long pending issue.
KVI expressed concern regarding the recent statement of Home Minister Mr. Rajnath Singh in
which he said that Articles 370 and 35 need be changed. KVI demands India goes back to the
conditions of accession and convene a new Jammu and Kashmir Constituent Assembly to draft a
new constitution and re-negotiate the relationship with Delhi, pending final solution.
KVI expects the new government will take appropriate steps to come to the terms with the
aspirations of Kashmiris. Kashmir situation is an eye-opener for both the government and Indian
public. The right thinking people are expected to urge upon the new government to address
Kashmir problem. Delaying its solution will deteriorate the situation further and result into the
continence of the loos of precious lives from both sides.

Parliament Times - September 30, 2020 0
Don't waste their energy on things they can't control Mentally strong people don't pay attention to the things which can neither be controlled nor...