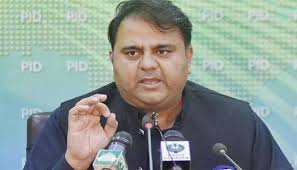 Islamabad:      Federal Minister for science and technology Fawad Chaudhry has said that accountability of judges like Iftikhar Chaudhry should also be done.
In his message on social networking site twitter, Chaudhry said, “Only in the result of 2 decisions of former chief justice Iftikhar Chaudhry, Pakistan is now facing fine of 1.40 billion dollars after paying fee of 100 million dollars to counsels.
He said accountability should also be done of such judges.
Inefficient judge becomes a big scourge, therefore there is need to change the procedure of appointment of judges.

Governor Punjab says the government is strengthening Parliament and democracy in Pakistan;

SUIC launches webinar series under the theme of “Learn, Launch and Grow”

Governor Punjab says the government is strengthening Parliament and democracy in...

An Indian diplomat – arrested in Germany for suspicious activities defying...

SUIC launches webinar series under the theme of “Learn, Launch and...