World should act over crimes against humanity in IOK, AJK President

April 24, 2019 International News, Kashmir Comments Off on World should act over crimes against humanity in IOK, AJK President 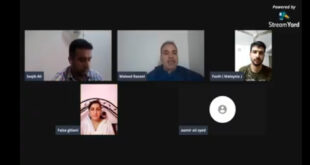 LONDON:   Azad Jammu and Kashmir President, Sardar Masood Khan on Wednesday warned that world war-II like catastrophe could happen if the international community continues to overlook India’s crimes against humanity.

He made these remarks while addressing a gathering of councillors, Kashmiri-Pakistani community leaders, businessmen, lawyers, judges and journalists at Waltham Stow town City Council Hall.

The president said that in the last century many European governments were appeasing a fascist government that resulted in the World War and the Holocaust. And now the world was busy in appeasing India, a perpetrator of unspeakable crimes against humanity in Kashmir, he lamented.

“The silence of the world over the situation in Indian Occupied Kashmir is a crime itself,” Khan said and added that the international community should hold its leaders directly responsible and accountable for what they say and what they do in regard to their global responsibilities.

Referring to recent statement of Indian Prime Minister who threatened to wipe Pakistan out by the use of the mother of nuclear bombs, President said it was the most irresponsible statement that had come from the leader of a country that claims to be the biggest democracy in the world.

He condemned the threatening statement of Indian Prime Minister Modi and called upon the United Nations Security Council to take serious cognizance of such statements. The President also urged the international community, United Nations, and global human rights organizations to take notice of the grave human rights violations in Indian Occupied Kashmir.

President Khan urged British Kashmiris to keep the momentum intact that generated in the British Parliament by highlighting the Kashmir dispute in its true perspective. He said that a parliamentary delegation from the UK should go to India, Pakistan, India and Occupied Kashmir to ascertain the facts on the ground. India.

He also urged young Kashmiris to develop and hone their skills to put across their point of view effectively and convincingly.

Share
Previous Construction of road from Kahori to Noseri Bridge would bring travelling facilities to the commuters ; Noreen Arif
Next Government of Japan extends financial support to maternal and Child Health Care and Security Improvement