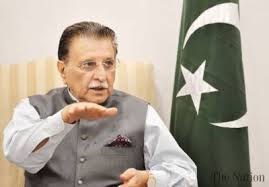 Addressing a press conference here on Sunday he said NIA made fabricated and baseless cases against Yasin Malik and was torturing him in the infamous Tahar jail. He said JI and JKLF had been banned in Indian Occupied Kashmir and there was a witch-hunt on character assassination of APHC leadership by India. He appealed the secretary general of United Nations to take notice of Indian brutalities against APHC leader Yasin Malik. He said fake cases were being registered against APHC leaders to quit liberation struggle and to demoralize them.

He said out of brutalities of Indian occupation forces in IOK Kashmiri youth adopted unconventional way of fighting back. We will welcome any fact finding mission to AJK, he added.

Mr. Haider said there was no political prison in any jail of AJK which could be confirmed by media by visiting all prisons.

He urged Pakistan and brotherly Muslims countries to put pressure on India to release Yasin Malik.

He said India had suspended Intra kashmir trade under baseless accusations. This trade was strengthening the bonds and relations of people of Kashmir which could not be digested by India, he added.

He told media that he would write a letter to UN Secretary General on increased atrocities and human rights abuses against APHC leaders and people of Kashmir.

He said Pakistani Ambassadors should effectively highlight Kashmir issue in the countries they are representing in.

He said torture and inhuman treatment of Indian authorities against Yasin Malik should be debated in human rights committee.

To a question he said Pakistani prime minister Imran Khan gave a positive statement a few days back but India responded to it negatively.

He said Narendra Modi was using the ploy of hate against Pakistan in a bid to win upcoming elections.

He said Kashmir issue would be resolved in accordance with UN resolutions. To another question he said to express solidarity with Yasin Malik and against his arrest he would give a call. He appealed that Mishal Malik wife of Yasin Malik and his daughter should be allowed to meet Yasin Malik at a time when his health was constantly worsening.

GPKSC commemorates Kashmir Martyrs Day in UK with pledge to continue Kashmiri martyrs mission till the liberation of IOJK:

One More Looses Life due to Corona Virus In AJK soaring...