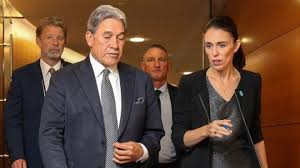 Christchurch: PM Jacinda Ardern says New Zealand’s cabinet has backed gun law changes “in principle” after an attack on two mosques left 50 dead and many injured.
Australian Brenton Tarrant, 28, has been charged with murder.
Police say the killer used military-style assault weapons that appeared to have been modified to make them more deadly for the attacks.
Friday’s events sparked calls for gun law reform, with Ardern saying soon after that “our gun laws will change”.
Speaking at a press conference after a cabinet meeting, Ardern said she expected to give details of the reforms by 25 March.
“This ultimately means that within 10 days of this horrific act of terrorism we will have announced reforms which will, I believe, make our community safer,” she said.
“We have made a decision as a cabinet, we are unified,” the prime minister told reporters.
Ardern also announced that an inquiry will look into the lead-up to the bloodshed, and what might have been done differently.
Nine people remain in hospital in a critical condition.
Many public vigils have been held across New Zealand over the weekend for the victims of the attacks, and more are planned for this week.
On Monday afternoon, about 3,000 high school and college students held a vigil in Hagley Park near the Al Noor mosque, one of the two mosques attacked on Friday.
At the weekend, Ardern said the suspect had a gun licence, obtained in November 2017, and owned five guns.
Earlier on Monday, gun retailer Gun City said it had sold weapons to the man charged with murder, but not the high-powered weapon used in the mosque shootings.
New Zealand’s Police Association has called for semi-automatic weapons to be banned, Radio New Zealand reported.
Previous attempts to tighten gun laws in New Zealand have failed due to a strong gun lobby and a culture of hunting.
Earlier on Monday, the National Crisis Centre gave an update setting out the kinds of help and support that are available, ranging from financial help for the families affected to assistance to schools and parents on how to communicate with their children about what happened.
Police said on Monday the criminal investigation into the shooting was the largest one ever undertaken by the country’s police.
Commissioner Mike Bush once again said authorities believe there was only one attacker, but added this didn’t rule out other people who might have provided support to him.
The threat level across the country remains high and “you will continue to see for weeks to come high vigilance a high visibility from New Zealand police and from our emergency service partners to make sure that everyone in New Zealand feels safe,” the commissioner said.