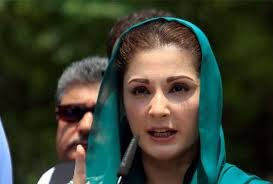 LAHORE: Pakistan Muslim League-Nawaz leader Maryam Nawaz on Sunday called a letter circulating with her name and signature fake and work of an evil mind.
The daughter of former prime minister also tweeted the fake letter addressed to a US diplomat.
The letter purports to seek US diplomat’s help requesting him use his influence in order to get relief for the former prime minister who has been suffering from a heart disease.