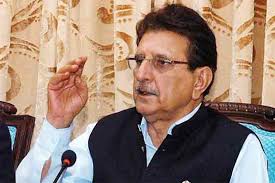 BHIMBER: (Parliament Times) AJK witnessed a revolution in education, health, tourism and power sectors under the leadership of Prime Minister Raja Farooq Haider Khan.
AJK Senior Minister Chaudhry Tariq Farooq expressed these views while addressing a public meeting in Bhimber which was also attended by the Prime Minister. He said PML-N believes in ideology and public service adding that present legislative assembly has complete freedom to make its decisions. He termed the 13th amendment as one of the big successes of present government.
Recalling Sardar Sikandar Hayat Khan’s services for AJK, he said he can’t forget his benefactor. He credited Sikandar for the projects like Girls Degree College, District Jail, Rest House, Stadium, water supply scheme and other projects in Bhimber. He suggested that all the bridges should be named after Sikandar Hayat in Bhimber. He said mini dams are being built in all the three wards at nallahs to provide facilities to peasants, farmers and people of the area. Greater water supply scheme would soon be started in the district, he remarked.
He expressed thanks to the people of Bhimber who elected him in four general elections out of five. The Minister drawn the attention of PM to the projects including construction of Jabbi Grid station, Ali Baig Girls Inter College, Barang Inter College, Jandi Chountra tourism park which needs to be completed.
“There are plenty of opportunities in livestock sector. Around 200,000 animals were sold on Eidul Azha in Bhimber” he said.
He said Prime Minister was enjoying the confidence of the entire cabinet. We are soldier of Nawaz Sharif and firmly stand behind him, he maintained.

AJK President pays glowing tributes to the defenders of country