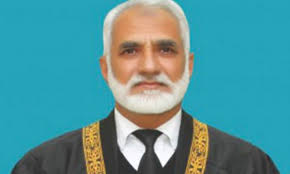 MUZAFFARABAD: (Parliament Times) Holy Prophet’s last sermon provides the basis of an Islamic Welfare State.
The Chief Justice of Azad Jammu and Kashmir Justice Ibrahim Zia said this while addressing the third annual seerat conference here on Saturday. The topic of the conference was “Concept of Islamic Welfare State in the light of Seerat-e-Tayyaba” which was held under the auspices of All Jammu and Kashmir Literary Council.
CJ Zia said if we lead our lives in accordance with the teachings of the Holy Prophet (PBUH) we can succeed in life here and hereafter. Elaborating further on welfare state he said “a state that accepts to provide every citizen with a specific standard of life”. He said Prophet Muhammad spent all his life in the welfare of humanity. “Islam being for all ages and races believes in the welfare of humanity in this world and the world hereafter. Seerat-e-Pak of prophet is a torch bearer and a complete guidance for the welfare of humanity” he said.
The council was presided over by Chairman Islamic Ideology Council Pakistan Dr. Ayaz Ahmed and attended by people of all walks of life.
Addressing the seerat conference Dr. Ayaz Ahmed said that the life and teachings of the Holy Prophet are a manifesto for the welfare of humanity for life. The concept of welfare of humanity is quite clear in the basic principles of the Prophet, he added. He said the basis of welfare of humanity is also found in Seerat-e-Tayyaba. The personality and character of the Prophet provided facilities and easiness for the people. The inward and outward of life of the prophet was crystal clear, he said.
Ahmed said prophet was a great justice, preacher, teacher and reformer. He said the basic point of a complete Islamic state is that the direction of the government exchequer is turned to the welfare of the people.