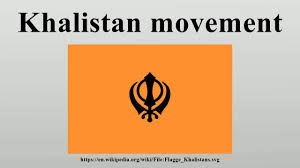 Pakistan and India are two neighboring foes. Pakistan has always tried to become
a friendly state towards neighbors but India’s attitude is vice versa. India always tries to vilify Pakistan on the international front. It used to blame Pakistan’s security agency ISI for every terrorism act or for the movements of freedom inside India. Indian media is supporting its government in this blame game. Recently, Indian Chief of army staff General Rawat again blames ISI for the Sikh movement named “Khalistan”. General Rawat revealed that the outfit has its activist in Britain (UK) and the United States of America (USA). Covertly ISI is supporting Sikhs.
Looking into the history, India represents itself as a secular state but in reality, India is a Hindu dominating state. In Indian Law, Sikhism is not considered as a separate religion rather they are considered as Hindus. At the time of independence and 3 wars against Pakistan, Sikhs remained an integral part of the Indian army. Later on, Sikhs demanded their born right of religious independence. Former Prime Minister of India, Indira Gandhi was the first who used armed forces against Sikhs. On her behalf, Indian army launched a military operation named “Operation Blue Star” in 1984. On June 3, 1984, Sikhs were gathered in “Darbar Sahib” to perform their religious rituals. 3 rd June is the most sacred day in Sikhism. This day was selected to do crackdown against Sikhs.
Around 12,000 Sikhs were killed, including women and children. The Gurdwara “Darbar Sahib” was bombed and the sacred place “Akal Takht” was destroyed. This event burned a fire in the hearts of Sikh youth. They raised the movement named “Khalistan movement”. From that date, the movement is continued till now. The formal Documentation of Declaration of Khalistan was issued on April 29, 1986. In this declaration, it was mandatory for every Sikh to abide by the declaration and support Khalistan Cause. At that time, Indian Government blamed Pakistan for the monetary support and provision of arms to Khalsa Sikhs.
The atrocities of Hindu Brahmans against Sikhs are continued and they have the
complete support of Indian Government. Now the time has changed but the behavior of
the Indian government is still the same.Sikhism is not recognized as a separate religion from Hinduism. Sikhs like any other religion want their separate identity.
For this reason, they have started a campaign internationally for self-
determination and separate homeland. They named this campaign as referendum 2020
and requested UN to intervene in this matter. A Pro-Khalistan rally was organized in the UK by Sikhs for the Justice. This type of rallies and protests are made not only in the UK but in Canada and US these rallies are made. Pro-Khalistan slogans are displayed in Amritsar. The Ads regarding Khalistan are displayed on the busses in the UK. India again accused ISI of supporting among Sikh youth.
A RAW front organization named “A publication of Bureau of Political Research
and Analysis” issued news item captioned “Army Chief (Indian) warns of Pakistan Plot to Revive Insurgency in Punjab” in November 2018. Moreover, Indian Army Chief, General Bipin Rawat Stated that attempts are being made through “External linkages and external abetment to revive insurgency in Assam and Punjab. On the other hand, Sikhs said there are no insurgencies and they can never forget the atrocities of the Indian Army in 1984.
Concluding more! Pakistan fully supports Kashmiri and Sikhs on humanitarian
grounds only. Kashmiris and Sikhs are deprived and suppressed minorities of India.India should review its policy towards minorities. It should give deserving rights to Muslims, Sikhs and even lower class Hindus. Indian media is telling the world that Pakistan has planned against India namely “K2” which stands for two K’s. One is for Kashmir and other is for Khalistan. On the other hand, Pakistan has forwarded its goodwill towards India by opening the Kartarpur border and welcoming Sikh community.

Visit of Pope to Najaf, Iraq

A Brief History of Pakistan By James Wynbrandt (Book review)

Parliament Times - March 7, 2021 0
By Humera Karim, Quetta: Taking risks to pursue her dream, Marzila, a 21-year-old Afghan refugee and medical worker in Pakistan, has convinced her family and...

Farooq Haider asserts of retaining power in AJK through “land-slide”...

Kashmir is under siege, Knocking at world conscience : TeK UK...