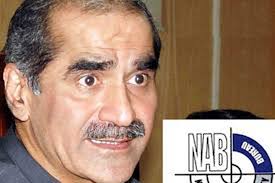 Lahore: Former Federal Minister for Railways and Pakistan Muslim League-Nawaz (PML_N) leader Khwaja Saad Rafiq, who had been taken into custody on Tuesday in Paragon Housing Scheme case, bemoaned his custody cell condition on Wednesday.
Complaining the National Accountability Bureau (NAB) officers’ behavior he said they turned back his food came from his home while the cell washroom was in poor condition as it did not have even a locker on the door.
Speaking informally with lawyers in court Rafiq said that they (government) are tracking him with thousands of police and ranger officers as he was a terrorist. “I am not,” he lambasted. He further said that his party’s activists were also not allowed into the court today (Wednesday). It is a discriminative behavior.