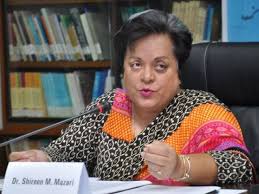 Islamabad: Federal Minister for Human Rights Dr Shireen Mazari has said that Pakistan needs to keep re-emphasizing the fact that when India took the Kashmir issue to the United Nations, it did not cite Pakistan as a transgressor.
She was addressing at a public talk on “Human Rights Violations in Indian Occupied Kashmir”, organized by the Institute of Strategic Studies Islamabad (ISSI) on Monday.
“We need to move beyond the rhetoric we are addicted to. Too many Kashmiris have died and too many generations have been lost. We need to move forward beyond rhetoric and take concrete steps for the solution of Kashmir issue adding that too many generations and innocent people in IOK have been suffered and lost their lives for the attainment of plebiscite which lies at the centre of UNSC resolutions” she added.
Dr. Mazari said presently, the violation by Indian forces have broken all bounds. Never before were women and children targeted with pellet guns or dragged along the streets of Srinagar she said. She lamented that the Pakistani government should have allowed a committee to investigate the Pakistani side of Kashmir. She labelled this as a major blunder.
She said UN finally did what they should have done and printed the report on human rights violations in IOK by India, which resultantly once again highlighted the world attention towards Kashmir issue.
She said that Pakistan should have allowed UN committee to visit AJK, It was a big mistake, there is nothing to hide in AJK and there is no comparison of AJK with IOK adding that our absurdity has lost Pakistan to show contrast between IOK and AJK. Shireen Mazari said we should move to Human Rights Council to have investigative commission to conduct independent inquiry to investigate human rights abuses and violations in IOK.