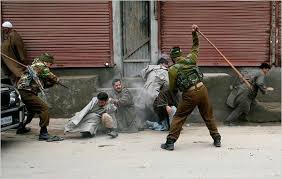 Brussels:
The All-Party Parliamentary Group on Kashmir in the European Parliament (APGK-EP) hosted a conference on “Kashmir – Human Rights, Conflict Resolution”.
The organisers included MEP Julie Ward and MEP Klaus Buchner in association with International Human Rights Association of American Minorities(IHRAAM), International Commission for Human Rights (ICHR), South Asian Centre for Peace and Human Rights (SACPHR) and Kashmir Youth Assembly, UK Europe. The event was held in connection with the celebration of International Human Rights Day on December 10, 2018.
The conference opened with the screening of a film titled “Bruised Paradise” highlighting gross human rights abuses taking place in occupied Kashmir where people are seeking their inalienable right to self-determination as promised by the international community through the United Nations resolutions.
Mr Frank Schawalba-Hoth, former MEP and founder of German Greens, who chaired and moderated the conference, impressed upon the collective declaration to resolve any international dispute including Kashmir in compliance with the Universal Declaration of Human Rights (UDHR) as a convenient and useful tool which provides hope, respect and courage to common good, collective peace and international security.
Opening the proceedings, MEP Buchner, recalled the importance placed by the civilized world in respecting the human rights. He highlighted the importance of fundamental freedoms of religion, speech and association as starting points for building trust amongst the parties in conflict situations and to help find resolution for peace and common security.Wajid Khan, MEP, emphasized that the people of Kashmir must be given their promised right to self-determination for which they have endured so much of repression but been deprived till date. He lamented that the world has been slow in ensuring the implementation of the UN resolutions resulting in gross human rights abuses in occupied Kashmir.
Barrister Abdul Majeed Tramboo, the ICHR Chairman, maintained that the crucial advocacy and diplomatic work on Kashmir is of utter significance. He stressed upon the strategy to place, once again, the Kashmir dispute high on agenda of the European Union including the European Parliament.Barrister Tramboo declared that he along with his colleagues is there to render all possible assistance to APGK and the interested MEPs in the advocacy of Kashmir within the European Union in particularly to achieve a fresh report on the current situation of Kashmir. Professor Nazir Ahmad Shawl, the SACFPHR Chairman, presented a historic analysis and evolution of the UDHR and the guarantees it offers to the people of the world. He reiterated the need for continued efforts to ensure that the Kashmiris’ fundamental human rights and freedoms were respected and they be given their right to self-determination without any further delay.
Professor Shawl referred to the European Parliament’s resolution on mass graves in occupied Kashmir and asked the APGK and all other MEPs to get the recommendations of the report implemented in terms that the disappeared people are rightly traced and the situation of half widows is resolved.Barrister Stuart Stevens, a leading human rights counsel in the City of London, in his speech stressed the need to link the world trade and economic cooperation with the observance of human rights. He deplored the world current and subtle trends of separating the human rights compliance record of a country from its desirability to become an international market and influential economic power. He insisted that such double standards must be recalibrated to achieve unified and human rights declaration compliant economic standards.Zubair Awan, the KYA Chairman and human rights lawyer in London, recalled the importance of youth engagement for the promotion and protection of human rights. He pleaded for youth engagement and emergence of young leadership and appealed to youngsters to come forward and stand shoulder to shoulder with the Kashmiri children and youth in solidarity with their struggle to protect their human rights and achieve their right to self-determination.The deliberation of the conference followed interactive question and answer session whereby the delegates expressed their sentiments and support for the people of Kashmir and asked questions to the panel.