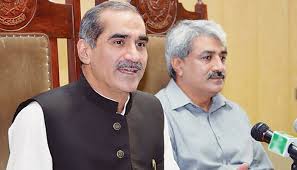 LAHORE: Pakistan Muslim League-Nawaz (PML-N) leader Khawaja Saad Rafique and brother Salman Rafique received an extension on their bail by the Lahore High Court (LHC) on Monday in the Paragon Housing scam.
The court also directed the National Accountability Bureau (NAB) to determine on an immediate basis of law if the team probing the matter is to be changed. A bench comprising two judges headed by Justice Tariq Abbasi heard the petition filed by the Khawaja brothers for pre-arrest bail.
According to the petition, the brothers had not been involved in any corruption. “We fully cooperated with NAB in the investigation and our pre-arrest bail should be approved,” it had said. The bench then proceeded to ask the NAB lawyer whether documents pertaining to the arrest were handed to the brothers, to which he replied, “The documents will be given when they are arrested.”
The bench, expressing anger over his response, then questioned, “Can those documents not even be shared with the court?” At this, the NAB lawyer said, “The documents related to the arrest are at the NAB office.”
The bench further inquired whether the Khawaja brothers were present in court and was told that they are. The brothers then told the court, “We fear that NAB will arrest us.”
Hearing the arguments, the bench then decided to extend the bail granted to Saad and Salman Rafique till December 5.
As per NAB officials, the Khawaja brother are booked under three cases pertaining to the Ashiana Iqbal Housing Scheme, Paragon Housing scam and corruption in Pakistan Railways.