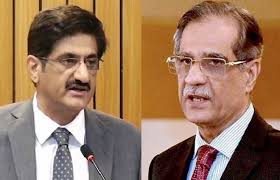 KARACHI: Chief Minister (CM) Sindh Syed Murad Ali Shah has met Chief Justice of Pakistan (CJP) Mian Saqib Nisar in his chamber at Supreme Court (SC) Karachi registry.
Advocate general Sindh, chief secretary and other officials also attended the meeting.
Talking to media men after his meeting with CJP, CM Sindh Syed Murad Ali shah said his meeting with CJP remained good and the problems of the province came under discussion during the meeting.
Shah told the media men the CJP congratulated him on becoming CM of the province and said that people of Sindh reposed trust on him.
He said that he informed the CJP about some problems facing them. He told CJP with reference to complaints from JIT probing into money laundering case that providing information is job of the institutions and not of CM.
According to CM Sindh, JIT had sought information from Irrigation, Works and Services department and only two days were given for this purpose. How can such huge data be provided in this time frame. It does not happen so that push the button and record is available.
He held if he was summoned for inquiry he would go there.
Appreciating the condition of hospitals in Karachi CJP said that hospitals in Karachi looked in better condition than KP.

INSPAD team much active to serve humanity in pandemic

INSPAD team much active to serve humanity in pandemic

Decision taken to close parliament house for two weeks in the...

Pakistan calls for equal participation of persons with disabilities in all...

Tit for tat to be given to government : Marriyam Aurangzeb