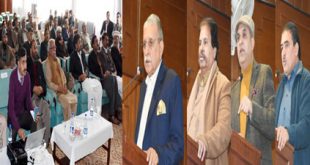 DFP hails UNSC for holding another debate on Kashmir situation

Muzaffarabad: (Parliament Times) The cyber crime committee constituted by the government of Azad Jammu and Kashmir here on Monday met under the chairmanship of Information Minister Mushtaq Ahmed Minhas wherein the committee members discussed in detail the matters regarding the legislation of cyber crime law and its execution in the region.

The participants of the meeting after reviewing and revisiting the cyber crime laws presently enforced in Pakistan stressed that there was a dire need of legislation and chalking out a proper mechanism for the implementation of the law in Azad Kashmir. A sub-committee that will be headed by Secretary Law has also been constituted that has been tasked to present its recommendation within next ten days. Other members of the subcommittee included DIG Police, Additional Secretary Law and Director General Information Technology.