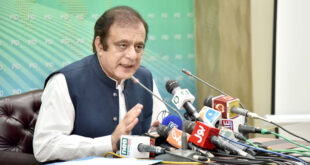 RAWALPINDI: (Parliament Times) A 15 years old boy is reported to have been kidnapped within the jurisdiction of Airport police.

According to media reports, one Halim reported to police that his son Habib Halim went outside the home and Abid Hussain and others allegedly abducted him.

Lahore,(Parliament Times): Punjab Governor Chaudhry Mohammad Sarwar says the coronavirus will not spare anyone and …